How to Hire JANE’S ADDICTION For Your Event!

The band consists of vocalist Perry Farrell, guitarist Dave Navarro, drummer Stephen Perkins and bassist Eric Avery. Jane’s Addiction was one of the first bands from the early 1990s alternative rock movement to gain both mainstream media attention and commercial success in the United States.

A pioneer of alternative metal, Jane’s Addiction is credited for the mainstream exposure of the alternative music scene in the 1990s. The band is also associated with the funk metal genre. 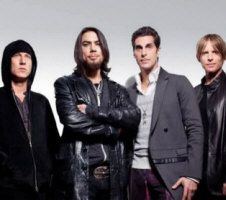 Hire Jane’s Addiction for your festival or concert plans!

In 1988, the band went on tour, opening for Iggy Pop and The Ramones. By the end of the tour, Jane’s Addiction was headlining clubs and theaters.

In 1991 the band headlined for the first Lollapalooza festival, which traveled across North America. The festival, created by Farrell and Marc Geiger showcased other cult artists: Siouxsie and the Banshees, Nine Inch Nails, the Butthole Surfers, Living Colour, The Rollins Band, The Violent Femmes, and Ice-T’s Body Count. The headliners began to get more exposure than ever before: “Been Caught Stealing” and “Stop!” became hits and earned rotation on MTV.

In 1997, the band reunited with Flea of the Red Hot Chili Peppers replacing Avery on bass guitar for a one-off tour.

In 2003, the band released its third studio album, Strays, before dissolving again the following year.

In 2008, the band’s original line-up reunited and embarked on a world tour. Avery acrimoniously left the band in early 2010, as the group began working on new material.

In 2011, the band released its fourth studio album, The Great Escape Artist, with Chaney returning to the band for its recording and subsequent tour.

In 2016, Jane’s Addiction were nominated for induction into the Rock and Roll Hall of Fame.

In August 2022, Avery rejoined the band after a twelve-year absence, ahead of a joint tour with the Smashing Pumpkins. Due to ongoing struggles with long COVID, Navarro was replaced by Queens of the Stone Age guitarist Troy Van Leeuwen for the duration of the tour.

Jane’s Addiction is regarded as one of the most influential acts in alternative music. Tom Morello of Rage Against the Machine compared the band’s influence to that of Nirvana. Artists influenced by Jane’s Addiction include Tool, Korn, The Smashing Pumpkins, Limp Bizkit, Candlebox, P.O.D., Oceansize, Paul Banks of Interpol, Nothingface, Stabbing Westward, Incubus, System of a Down, Devin Townsend and Strapping Young Lad.

Hire Jane’s Addiction for your party or event!

Jane’s Addiction may be available for your next special event!

Frequently Asked Questions About How To Hire JANE’S ADDICTION for a private party or special event.

Include information about your plans for your event and how taking steps to hire JANE’S ADDICTION (or someone similar) might be of special interest.

Official booking fees for JANE’S ADDICTION, or any other celebrity, are determined based on a number of factors and may change at anytime without prior notice.