How to Hire 5 SECONDS OF SUMMER For Your Event!

Originally beginning their career as YouTube celebrities, they rose to international fame while touring with English-Irish boy band One Direction on their Take Me Home Tour.

Since 2014, 5 Seconds of Summer have sold more than 10 million albums, sold more than 2 million concert tickets worldwide, and the band’s songs streams surpass 7 billion, making them one of the most successful Australian musical acts in history.

In the US, 5 Seconds of Summer became the first Australian act to achieve three number one albums on the Billboard 200 album chart. They also became the first band (not vocal group) to have their first three full-length albums debut at the top in the US. 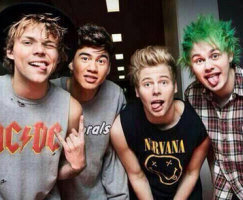 Hire 5 Seconds of Summer for a company’s special event!

All singles from the band’s four studio albums, as well as all four albums, have charted in multiple countries, received multiple official sale certifications, and have been featured in numerous weekly and year-end charts, as well as making an appearance on decade-end charts.

5 Seconds of Summer‘s musical style has been described as pop rock, pop, pop punk, power pop, and new wave. In 2015, Rolling Stone magazine called them “emo-gone-pop” and John Feldmann of Goldfinger stated that, “[5 Seconds of Summer] is the best pop-punk band I’ve ever heard”. In 2017, Matt Collar of AllMusic described the band as having a reminiscent of “’90s punk-pop” and “2000s boy band pop” in their sound.

Hire 5 Seconds of Summer for that special anniversary!

Through the release of Youngblood and Calm, the band has evolved from their pop-punk roots to explore musical depth within pop, new wave, rock and pop rock. The band’s quintessential developing sound has now been described as “classic pop-rock sentiments setting up the layering for the catchy hook.”

In 2019, the band was awarded the prestigious APRA Music Awards’ Outstanding International Achievement Award for their excellence and outstanding worldwide success in sales and airplay performance.

Hire 5 Seconds of Summer for a memorable evening of excellent entertainment!

In 2020, 5 Seconds of Summer were awarded and honored in the APRA AMCOS’ The 1,000,000,000 List, which recognizes excellence among Australian songwriting artists who have achieved massive international success. The band was awarded for their single, “Youngblood”, reaching over a billion streams. As of this writing, there are only 16 artists in history who have been awarded a position on the list.

Hire 5 Seconds of Summer for your party or event!

5 Seconds of Summer may be available for your next special event!

Frequently Asked Questions About How To Hire 5 SECONDS OF SUMMER for a private party or special event.

Include information about your plans for your event and how taking steps to hire 5 SECONDS OF SUMMER (or someone similar) might be of special interest.

Official booking fees for 5 SECONDS OF SUMMER, or any other celebrity, are determined based on a number of factors and may change at anytime without prior notice.