How to Hire BLINK-182 For Your Event!

Though their sound has diversified throughout their career, their musical style blends catchy pop melodies with fast-paced punk rock. Their lyrics center on relationships, adolescent frustration, and maturity—or lack thereof. The group emerged from a suburban, Southern California skate-punk scene and gained notoriety for high-energy live shows and irreverent humor.

Blink-182‘s straightforward approach and simple arrangements, which helped initiate pop-punk’s mainstream rise, made them popular among generations of listeners. Worldwide, the group has sold more than 50 million albums, and have moved more than 13 million copies in the U.S. 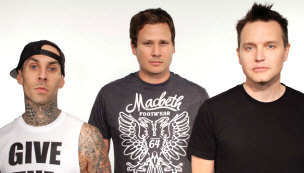 Hire Blink-182 for your festival or concert plans!

Blink-182‘s musical style is mainly considered pop punk, a genre that combines influences of pop music with traditional punk rock. Throughout the band’s career, though their sound has diversified, a large component of the band’s music favors fast tempos, catchy melodies, prominent electric guitar with distortion, and power chord changes.

The band have claimed punk rock group the Descendents to be their greatest influence on a number of occasions. They have also named the Beatles, the Ramones, the Beach Boys, the Cure, Depeche Mode, U2, Stiff Little Fingers, All, Dinosaur Jr., NOFX, Bad Religion, Refused, Fugazi, Screeching Weasel, The Vandals, the Queers, and Jimmy Eat World as inspirations.

Blink-182 was one of the most popular rock bands at the turn of the millennium and spearheaded the second wave of pop punk and its journey into the mainstream.

Hire Blink-182 for your party or event!

Blink-182 may be available for your next special event!

Frequently Asked Questions About How To Hire BLINK-182 for a private party or special event.

Include information about your plans for your event and how taking steps to hire BLINK-182 (or someone similar) might be of special interest.

Official booking fees for BLINK-182, or any other celebrity, are determined based on a number of factors and may change at anytime without prior notice.