How to Hire GREEN DAY For Your Event!

Green Day was part of the California punk scene. Childhood friends Billie Joe Armstrong (guitar, vocals) and Mike Dirnt (bass; born Mike Pritchard) formed their first band, Sweet Children, in Rodeo, California, when they were 14 years old. By 1989, the group had added drummer Al Sobrante and changed their name to Green Day. That year, the band independently released their first EP, 1,000 Hours, which was well-received in the punk scene. 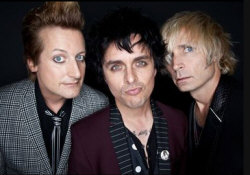 Hire Green Day for your festival or concert plans!

Throughout the early ’90s, Green Day continued to cultivate a cult following, which only gained strength with the release of their second album, 1992’s Kerplunk. The underground success of Kerplunk led to a wave of interest from major record labels; the band eventually decided to sign with Reprise.

For most of 1993, Green Day supported another California punk band, Bad Religion, as an opening act for their Recipe for Hate Tour.

In 1994, alongside fellow California punk bands Bad Religion, the Offspring, Rancid, Pennywise and Social Distortion, Green Day is credited with popularizing mainstream interest in punk rock in the U.S.

Dookie, Green Day‘s major label debut, was released in the spring of 1994. Thanks to MTV support for the initial single “Longview,” Dookie became a major hit.

The album continued to gain momentum throughout the summer, with the second single “Basket Case” spending five weeks on the top of the American modern rock charts.

At the end of the summer, the band stole the show at Woodstock ’94, which helped the sales of Dookie increase. By the time the fourth single “When I Come Around” began its seven-week stay at number one in the modern rock charts in early 1995, Dookie had sold more than five million copies in the US alone; it would eventually top eight million in America, selling more than eleven million copies internationally. Dookie also won the 1994 Grammy for Best Alternative Music Performance.

In the fall of 1995, Green Day quickly followed Dookie with Insomniac; during the summer, they hit number one again on the modern rock charts with “J.A.R.,” their contribution to the Angus soundtrack. Insomniac performed well initially, entering the US charts at number two, and selling more than two million copies by the spring of 1996, yet none of its singles – including the radio favorite “Brain Stew/Jaded” – were as popular as those from Dookie.

In the spring of 1996, Green Day abruptly cancelled a European tour, claiming exhaustion. Following the cancellation, the band spent the rest of the year resting and writing new material. The end result is, what is called by many, the best album of their career, Nimrod.

“Nimrod” was well received by most critics and fans. The album sold 80,000 copies in its first week to land at #10 on the Billboard charts. The first single from “Nimrod” was “Hitchin’ A Ride.” The single made it to #5 on the modern rock charts and was in heavy rotation on MuchMusic and MTV.

The next single the band released would not make it to number one (its highest position was #2), but it is now probably the most well-known song Green Day ever wrote. Featuring Billie Joe on acoustic guitar and vocals, “Time Of Your Life” became the song to play in any remotely sad situation. The song was even used on the last ever episode of the hit TV show “Seinfeld” (it was also the most watched finale in the history of TV).

In the fall of 2000, Warning: was released, and is by far Green Day‘s most ambitious album to date. Just four weeks after the release of “Minority,” it sat atop Billboard’s Modern Rock chart; no other Green Day song has hit the top that fast.

In 2015, the band was inducted into the Rock and Roll Hall of Fame, their first year of eligibility.

Members of the band have collaborated on the side projects Pinhead Gunpowder, The Network, Foxboro Hot Tubs, The Longshot, and The Coverups. They have also worked on solo careers.

Outside of their punk influences, Green Day have also cited hard rock bands the Kinks, the Who, and Cheap Trick. Green Day has cited Operation Ivy as a big influence.

During the American Idiot and 21st Century Breakdown era of Green Day, the band was influenced by the Who, U2, Motown albums, and musicals, such as Grease.

The band has been cited as an influence by a variety of artists, including Avril Lavigne, Fall Out Boy, Blink-182, Lady Gaga, Wavves, Fidlar, Tegan and Sara, Bowling for Soup and Sum 41.

Hire Green Day for your party or event!

Green Day may be available for your next special event!

Frequently Asked Questions About How To Hire GREEN DAY for a private party or special event.

HOW TO BOOK GREEN DAY?
(i.e., how to hire GREEN DAY for an event)

Include information about your plans for your event and how taking steps to hire GREEN DAY (or someone similar) might be of special interest.

Official booking fees for GREEN DAY, or any other celebrity, are determined based on a number of factors and may change at anytime without prior notice.

IS GREEN DAY AVAILABLE TO WORK MY EVENT?
(i.e., what is GREEN DAY‘s availability?)