How to Hire CHEAP TRICK For Your Event!

Since first blowing out of Rockford, Illinois, to reinvigorate American rock ‘n’ roll with a unique brand of high-powered pop, the band has never stopped adding to its achievements. 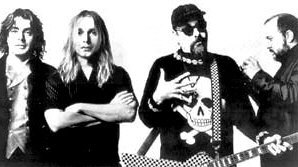 Hire Cheap Trick for your festival or concert plans.

They can point to four platinum albums (“Cheap Trick at Budokan” reached triple-platinum) and three gold LPs, a number-one single (“The Flame”), seven other Top 40 hits and a gold-certified video compilation entitled “Every Trick in the Book.”

Cheap Trick is one veteran band that still makes stardom look like fun. Nielsen remains the guitar hero for a warped universe, prancing around, shouldering a different axe for each song, making faces and flicking bag-loads of picks into crowds as souvenirs.

Petersson slings 12-string basses as if the massive instruments were easy to play, and Zander sings with more accurate energy than a heat-seeking missile. Behind them all, Bun E. Carlos keeps the beat with authoritative aplomb. 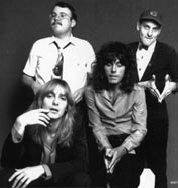 In addition to working with executive producer Bruce Dickinson on the assembly and packaging of the “Sex, America, Cheap Trick” box set, the group continues to bring its checkerboard showmanship to concert stages all over the world. Nielsen, Petersson, Carlos and Wisconsin native Zander all grew up in Rockford, coming of Midwest age just as the British Invasion hit.

Inspired by English rock, they did what a lot of other young music fans did – picked up instruments and formed bands. In between research and recreation trips of various sorts to Europe and elsewhere, Petersson and Nielsen made their long-playing debuts on a 1969 album by Fuse, and subsequently launched Sick Man of Europe with Carlos and Robert “Stewkey” Antoni, the former singer of Nazz.

Upon Zander’s induction to the band in 1974, Sick Man of Europe became Cheap Trick, and Midwest clubs were soon rocking to “The Ballad of Richard Speck,” “ELO Kiddies” and “He’s a Whore.” With a vivid image, a great singer and more instruments than a music store, Cheap Trick brought arena-scaled flamboyance to the unsigned band circuit and became the area’s biggest local attraction.

After being sold on the idea by producer Jack Douglas (who had seen the group play in a bowling alley), Epic signed the group in 1976, and released its self-titled album the following February. The roaringly weird debut got great reviews but didn’t sell; the more pop-conscious follow-up, “In Color” and “In Black and White,” (despite containing the original studio version of “I Want You to Want Me”), met roughly the same fate.

Hire Cheap Trick for a memorable evening of excellent entertainment!

Between January 1977 and January 1978, Cheap Trick played 179 concerts before nearly a million people. Within days of returning from that year-long trek, the band cut “Heaven Tonight” on a rushed four-week schedule before flying off for a European tour. In April ’78, just as “Heaven Tonight” (leading off with the classic “Surrender”) was being released, Cheap Trick toured Japan, where “In Color” had already gone gold.

Three shows were recorded for a live album to be released in Japan only, but “Cheap Trick at Budokan” became a phenomenally popular import in the U.S., where it was belatedly released and went on to sell three million copies. The live version of “I Want You to Want Me” became the band’s first American Top 10 hit, followed by a cover of Fats Domino’s “Ain’t That a Shame.”

In 1979, Cheap Trick released the ambitiously orchestrated “Dream Police,” its fifth album in less than three years. In 1980, the band recorded “All Shook Up” with Beatles producer George Martin, and then bid adieu to Petersson, who took a seven-year hiatus, rejoining the group in time to make “Lap of Luxury.”

That 1988 album reinvigorated Cheap Trick‘s commercial stature when “The Flame,” a ballad, reached number one; the album’s cover of Elvis Presley’s “Don’t Be Cruel” also became a Top 5 single. (In the meantime, the group had sequentially employed bassists Pete Comita and Jon Brant and had released four albums: 1982’s “One on One,” produced by Roy Thomas Baker; 1983’s “Next Position Please,” produced by Todd Rundgren; 1985’s “Standing on the Edge,” produced by Jack Douglas; and 1986’s “The Doctor,” produced by Tony Platt.) 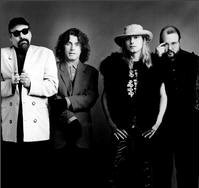 In the wake of its resurgent stardom, Cheap Trick made “Busted” in 1990, and then ended its career-long tenure with Epic Records. That move sparked a greatest hits collection salted with a new cover of the Beatles’ “Magical Mystery Tour” in 1991 and a second disc of vintage live tracks (Budokan II) in 1994. Zander made a solo album with an all-star cast of collaborators in 1993.

The band then moved to Warner Bros. and released “Woke Up With a Monster” in 1994. The group subsequently contributed an imaginative cover of “Cold Turkey” to “Working Class Hero,” a John Lennon tribute record and re-recorded “Come On, Come On” from “In Color” and changed it to “Come On Christmas” for a Rockford charity CD.

In 1996, still without a label, Cheap Trick recorded a stunning 3-song demo which got passed around with a mini-bidding war ensuing. Red Ant Entertainment, a new independent label, offered Cheap Trick a deal and their own imprint, Cheap Trick Records.

The band took them up on it and recorded an album with Ian Taylor (“One on One“) that critics and fans agreed was one of their finest. In February 1997, Sub Pop Records released a limited-edition Cheap Trick single produced by Steve Albini. This sold-out, vinyl-only recording featured a cover of The Move’s “Brontosaurus” and an original, “Baby Talk.” In April 1997, their self-titled album was released by Red Ant. The band deemed this the first record of the second half of their career.

Cheap Trick hit the road with a variety of different shows during the year: special “Budokan” shows to commemorate the 20th anniversary of the “Cheap Trick at Budokan” album and “three-night-stand” shows in select cities where the band performed their first three albums (“Cheap Trick,” “In Color” and “Heaven Tonight“) on consecutive evenings to sold out crowds. These amazing shows lead to the release of 1999’s “Music For Hangovers,” recorded over a three-night stint at Chicago’s Metro in 1998.

In 1999, Cheap Trick celebrated their 25th anniversary…in style. Holding court for 15,000 rabid Cheap Trick fans at Rockford’s Davis Park, the three-hour bash found the band performing “every Trick in the book” – a song from every Cheap Trick album!

In 2016, Cheap Trick was inducted into the Rock and Roll Hall of Fame. The induction ceremony was held at the Barclays Center in Brooklyn, New York on April 8, and the band was introduced by Kid Rock.

Cheap Trick have been cited as an influence on several artists in the alternative rock and power pop genre, including Nirvana, Pearl Jam, and Smashing Pumpkins.

The band is known for their energetic live performances and catchy, hook-laden power pop and hard rock songs. Over the years, Cheap Trick has received numerous awards and accolades for their contributions to music.

Here are a few notable awards that Cheap Trick has received:

In 1999, Cheap Trick received a star on the Hollywood Walk of Fame in the category of Recording.

The band continues to be respected and celebrated for their enduring contributions to rock music.

Hire Cheap Trick for your party or event!

Frequently Asked Questions About How To Hire CHEAP TRICK for a private party or special event.

HOW TO BOOK CHEAP TRICK?
(i.e., how to hire CHEAP TRICK for an event)

Include information about your plans for your event and how taking steps to hire CHEAP TRICK (or someone similar) might be of special interest.

Official booking fees for CHEAP TRICK, or any other celebrity, are determined based on a number of factors and may change at anytime without prior notice.

IS CHEAP TRICK AVAILABLE TO WORK MY EVENT?
(i.e., what is CHEAP TRICK‘s availability?)