How to Hire KID ROCK For Your Event!

His style alternates between rock, hip hop, country, and heavy metal. A self-taught musician, he plays every instrument in his backing band and has overseen production on all but two of his albums.

Hire Kid Rock:
In 1998, Kid Rock unleashed his major label debut, the classic “Devil Without a Cause.” The album – which includes the smash singles/videos “I Am The Bullgod,” “Bawitdaba,” “Cowboy” and “Only God Knows Why” – eventually went on to be Diamond Award certified by the RIAA for more than 10,000,000 sold.

Hire Kid Rock for your festival or concert plans!

Kid Rock‘s next magnum opus, the acclaimed “Cocky,” was released in November 2001. Recorded in Detroit at Kid Rock‘s Clarkston Chophouse studio, the album includes such larger-than-life arena anthems as “Forever,” “What I Learned Out On The Road,” “Lonely Road of Faith” and the sensational Top Ten duet with Sheryl Crow, “Picture”.

The RIAA 4x-platinum certified “Cocky” remained on the “Billboard 200” album chart more than 100 weeks after its release. 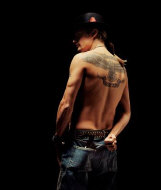 Hire Kid Rock to entertain your friends and colleagues.

An inveterate road warrior, Kid Rock and Twisted Brown Trucker have earned a reputation as one of hardest working bands in rock ‘n’ roll, blowing the roofs off of theatres, arenas, and enormodomes on countless cross-country tours, not to mention treks around the globe.

Kid Rock has been loud and proud in his support of the men and women of the United States Military. In January 2001, he donated proceeds from a Norfolk, Virginia, concert to the Navy Marine Corp Relief Society, an effort undertaken to aid the families of those crewmembers killed in the terrorist attack on the USS Cole.

The concert came about after Rock heard that “American Bad Ass” was played over the loudspeakers of the crippled naval ship just as it pulled out of port to head home. December of that year saw Kid Rock and TBT visiting the Ramstein Air Force Base in Germany to perform alongside J. Lo and Ja Rule for a massive U.S.O. show (later broadcast on MTV as For The Troops: An MTV/U.S.O. Special). 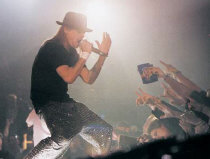 Hire Kid Rock to entertain at your company’s special event.

In June 2003, Kid Rock ventured to Kuwait, Qatar, and Iraq as part of a U.S.O. tour to brighten the spirits of troops serving in Operation Iraqi Freedom. A highlight of the journey occurred as Rock arrived at a military hangar in Baghdad expecting to just sign autographs. When the thousands of troops waiting to meet him started cheering, the Motor City superstar decided to put on an impromptu concert, using instruments on stage designated for a military band.

Hire Kid Rock for your party or event!

CK for a private party or special event.

Include information about your plans for your event and how taking steps to hire KID ROCK (or someone similar) might be of special interest.

Official booking fees for KID ROCK, or any other celebrity, are determined based on a number of factors and may change at anytime without prior notice.

Exclusive agents with exclusive representation frequently quote a range instead of a specific price, since changes can occur at any time. Generally, the artist’s manager has a role in the decision to accept any particular offer from a talent buyer.

IS KID ROCK AVAILABLE TO WORK MY EVENT?
(i.e., what is KID ROCK‘s availability?)