How to Hire GOOD CHARLOTTE For Your Event!

Twin brothers Benji and Joel Madden (born 3/11/79) grew up in a lower middle-class family in the town of Waldorf, Maryland – “the middle-of-nowhere suburbs,” says Benji.  “Ours was definitely a dysfunctional family situation,” he admits, “but luckily me and Joel always had each other. When things started to fall apart, we just got into music.” The twins’ older brother Josh turned them on to influential albums by Rancid, Minor Threat, The Cure, the Smiths, and many more. 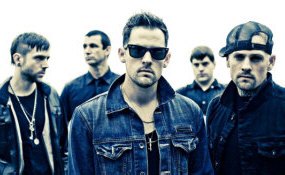 Hire Good Charlotte for your festival or concert plans!

Benji Madden began teaching himself guitar at 16; Joel gravitated towards lead vocals. “Right away, Joel and I started thinking up songs,” Benji recalls. “We’d go straight to our room after school, singing and playing for hours every day.”

After Paul (bass) and Billy (guitar) joined, Good Charlotte took their name from a children’s book and played their first gig in a neighbor’s basement for an audience of 20. “We only played our own songs – we weren’t good enough to learn anyone else’s songs!”

The brothers dedicated themselves to their music, although they had almost no money for equipment and no connections in the industry. They cut their first demo, wrote their own bio, and began mailing packages off to a list of record companies obtained from a magazine.

“I wrote this letter saying, we’re Good Charlotte and if you sign us now it will be a lot cheaper than if you wait!” recalls Benji. “Our ignorance was kind of a blessing. We couldn’t be discouraged by knowing too much about how the business really works.”

Benji and Joel graduated high school in June 1997, and for a graduation present the twins’ mother presented them with a pair of open airline tickets to California.

“Some of our favorite bands like Green Day had started out at this East Bay club called 924 Gilman Street. So when we graduated, that summer we made a pilgrimage to visit the club. We’d never even been on a plane before, but we have an aunt in Berkeley who let us crash with her.”

The brothers returned to Maryland, newly inspired and more determined than ever. They left home and moved to Annapolis, played many more shows both electric and acoustic, and worked “all kinds of shitty jobs I’ve had over 30 of them,” says Benji. “It was a struggling time in our lives, but it was also a great time. It’s good to be hungry sometimes.”

When Billy joined on second guitar, Good Charlotte was complete. The band won a local contest, and their song, “Can’t Go On”, was included on a sampler of area talent. They attracted the interest of a manager and Lit offered a support slot on a series of sold-out East Coast dates.

“We had no money, no transportation, and no way to do the gigs. Our mom was living in like a shed on a neighbor’s property, and the only thing she really owned was a mini-van. She said, “You guys take the mini-van to play the shows and I’ll catch rides or walk to work”. That just shows you how she’s been there for us the whole time.”

In 1998, the band began building a fan base by performing at the HFStival and serving as support slots for Blink-182, Lit and Bad Religion.

“By the time we played New York with Lit, in December 1999, all the labels turned out. We signed our deal in May 2000, in the studio where we were recording, and the album Good Charlotte (Epic) came out in September.”

Starting in 2000, the group became a full-time touring act with support slots for Lit, Goldfinger, Sum 41, and Mest.

On November 25, 2008, Greatest Remixes was released. This compilation album includes 15 songs from previous Good Charlotte albums remixed by other artists such as Metro Station, Junior Sanchez, William Beckett from The Academy Is…, Patrick Stump from Fall Out Boy, and The White Tie Affair featuring Mat Devine of Kill Hannah.

The music video for “Like It’s Her Birthday” has cameos from The Maine‘s lead singer John O’Callaghan and guitarist Kennedy Brock and Boys Like Girls‘ lead singer Martin Johnson, and guitarist Paul DiGiovanni.

On June 2, 2015, Good Charlotte was featured in Waka Flocka‘s song “Game On”, a song from the soundtrack to Pixels movie.

In 2016, the band supported All Time Low on the UK and Ireland leg of the Back to the Future Hearts tour.

Good Charlotte has been mainly described as a pop punk band. The band also has been described as alternative rock, emo, punk rock, pop/rock, skate punk, and emo pop.

Benji Madden was a fan of punk band Social Distortion whereas his brother Joel Madden was interested in bands like The Smiths and The Cure. Good Charlotte cite Beastie Boys, Minor Threat, the Clash, the Sex Pistols, Rancid, and Green Day as their influences.

Hire Good Charlotte for your party or event!

Good Charlotte may be available for your next special event!

Frequently Asked Questions About How To Hire GOOD CHARLOTTE for a private party or special event.

Include information about your plans for your event and how taking steps to hire GOOD CHARLOTTE (or someone similar) might be of special interest.

Official booking fees for GOOD CHARLOTTE, or any other celebrity, are determined based on a number of factors and may change at anytime without prior notice.