How to Hire GORILLAZ For Your Event! 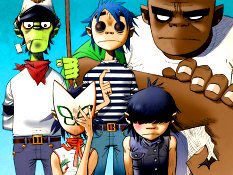 Hire Gorillaz for your festival or concert plans!

The album, Plastic Beach, was recorded throughout 2008 and 2009 in London, New York City and Syria. Plastic Beach saw Gorillaz move into a more electronic pop sound. Plastic Beach also featured the largest cast of collaborators featured yet on a Gorillaz album with an incredibly eclectic, surprising cast of people” including artists such as Snoop Dogg, Mos Def, Bobby Womack, Little Dragon, Lou Reed and Gruff Rhys among others.

On 9 September 2020, the band released “Strange Timez”, the sixth episode of Song Machine. The track features Robert Smith, from the Cure.

In August 2022, the band performed a new song “New Gold” featuring Tame Impala and Bootie Brown at All Points East in London.

On 31 August 2022, the band released “New Gold” as their second single for their upcoming album, announced on the same day to be titled Cracker Island, set to be released on 24 February 2023. The album, also features appearances from Stevie Nicks, Bad Bunny, Beck, and Adeleye Omotayo.

Gorillaz has presented itself live in a variety of different ways throughout the band’s history, such as hiding the touring band from the audience’s view in the early years of the project, projecting animated band members on stage via computer graphics and traditional live touring featuring a fully visible live band.

The band has sold more than 26 million records worldwide and is cited by Guinness World Records as the world’s “Most Successful Virtual Band”.

They have won a Grammy Award, two MTV Video Music Awards, an NME Award and three MTV Europe Music Awards. They have also been nominated for 11 Brit Awards and won Best British Group at the 2018 Brit Awards.

Hire Gorillaz for your party or event!

Gorillaz may be available for your next special event!

Frequently Asked Questions About How To Hire GORILLAZ for a private party or special event.

HOW TO BOOK GORILLAZ?
(i.e., how to hire GORILLAZ for an event)

Include information about your plans for your event and how taking steps to hire GORILLAZ (or someone similar) might be of special interest.

Official booking fees for GORILLAZ, or any other celebrity, are determined based on a number of factors and may change at anytime without prior notice.

IS GORILLAZ AVAILABLE TO WORK MY EVENT?
(i.e., what is GORILLAZ‘s availability?)