How to Hire GRIMES For Your Event!

Her music early work has been described as “lo-fi R&B.” Overall, her work has been categorized as synth-pop, electropop, art pop, indie pop, dream pop, and experimental pop and also incorporates dance, hip hop, and rock. Her lyrics often touch on science fiction and feminist themes. As of this writing, she has released five studio albums.

Hire Grimes for your festival or concert plans!

On March 15, 2015, Grimes and Bleachers released their collaboration, “Entropy” for the HBO TV show Girls. In the summer of 2015, Grimes toured with Lana Del Rey for several of her Endless Summer Tour dates.

On April 10, 2018, Grimes was featured on “Pynk,” the third single from Janelle Monáe‘s album, Dirty Computer. 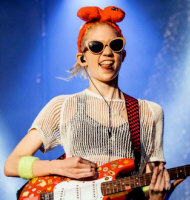 Grimes appeared on Bring Me the Horizon‘s “Nihilist Blues” from their sixth album, Amo.

In July 2021 Grimes, alongside will.i.am, Alanis Morissette, Nick Lachey, and Rocsi Diaz were revealed as judges on Alter Ego, a new singing competition series in which the contestants make the use of motion capture technology to portray themselves as “dream avatars”.

Grimes made a cameo appearance in the short film, Discord: The Movie, alongside Awkwafina, Danny DeVito, and J Balvin.

Grimes is an opening act on select dates for Swedish House Mafia‘s “Paradise Again Tour” alongside Kaytranada, ZHU, and Alesso. The tour ran from July 29 to November 13, 2022.

Her work has been likened to various artists, including Björk, Julianna Barwick, Siouxsie Sioux, and Enya. She has stated that she loves British rock bands like Bring Me the Horizon and The Foals.

Hire Grimes for your party or event!

Grimes may be available for your next special event!

Frequently Asked Questions About How To Hire GRIMES for a private party or special event.

HOW TO BOOK GRIMES?
(i.e., how to hire GRIMES for an event)

Include information about your plans for your event and how taking steps to hire GRIMES (or someone similar) might be of special interest.

Official booking fees for GRIMES, or any other celebrity, are determined based on a number of factors and may change at anytime without prior notice.

IS GRIMES AVAILABLE TO WORK MY EVENT?
(i.e., what is GRIMES‘s availability?)