How to Hire HALSEY For Your Event!

Hire Halsey:
Ashley Nicolette Frangipane, known professionally as Halsey, is an American singer. Gaining attention from self-released music on social media platforms, she was signed by Astralwerks in 2014 and released her debut EP, Room 93, later that year.

Halsey released her debut studio album, Badlands, in 2015. The album was later certified Double Platinum by the Recording Industry Association of America (RIAA), as were its tracks “Colors” and “Gasoline”.

In 2020, Billboard reported that Halsey has sold more than 1 million albums and received more than 6 billion streams in the United States. She is noted for her distinctive singing voice. 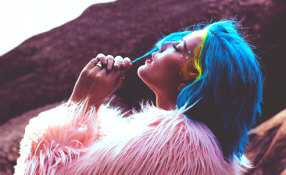 Hire Halsey for your festival or concert plans!

Her awards include three Billboard Music Awards, as well as a Billboard Women in Music Award, an American Music Award, one GLAAD Media Award, an MTV Video Music Award, and nominations for three Grammy Awards. Halsey was named Songwriter of the year by BMI Film & TV Awards in 2021. She was also included on Time magazine’s annual list of the 100 most influential people in the world in 2020.

During Halsey‘s childhood, her mother listened to the Cure, Alanis Morissette, and Nirvana, while her father listened to the Notorious B.I.G., Slick Rick, Bone Thugs-n-Harmony, and Tupac Shakur. She has said that their musical tastes have been a great influence on her. She has called Panic! at the Disco the “band that changed [her] fucking life” and credits Lady Gaga for giving her the strength to be herself.

Halsey is noted for her distinctive “indie” style of singing, which has garnered controversial feedback. She sings with an accent different from her speaking voice. She is known as a pop, electropop, synth-pop, art pop, alternative pop, R&B, indie pop, and alternative R&B artist.

Hire Halsey for your party or event!

Halsey may be available for your next special event!

Frequently Asked Questions About How To Hire HALSEY for a private party or special event.

HOW TO BOOK HALSEY?
(i.e., how to hire HALSEY for an event)

Include information about your plans for your event and how taking steps to hire HALSEY (or someone similar) might be of special interest.

Official booking fees for HALSEY, or any other celebrity, are determined based on a number of factors and may change at anytime without prior notice.

IS HALSEY AVAILABLE TO WORK MY EVENT?
(i.e., what is HALSEY‘s availability?)