How to Hire JACK WHITE For Your Event!

He is best known as the lead singer and guitarist of the duo the White Stripes. White has enjoyed consistent critical and popular success and is widely credited as one of the key artists in the garage rock revival of the 2000s. He has won 12 Grammy Awards, and three of his solo albums have reached number one on the Billboard charts. 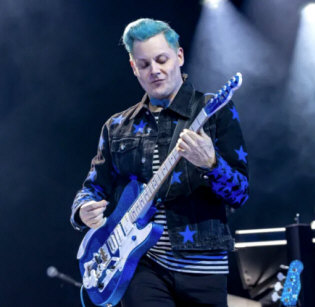 Hire Jack White for your festival or concert plans!

Jack White has enjoyed both critical and commercial success and is widely credited as one of the key artists in the garage rock revival of the 2000s. Rolling Stone ranked him number 70 on its 2010 list of “The 100 Greatest Guitarists of All Time”. David Fricke’s 2011 list ranked him at number 17.

He has won twelve Grammy Awards, with 33 nominations, and three solo albums have reached number one on the Billboard charts.

In 2008, he recorded “Another Way to Die” (the title song for the 2008 James Bond film Quantum of Solace) with Alicia Keys, making them the only duet to perform a Bond song.

In early 2009, White formed a new group called the Dead Weather.  Mosshart sang, White played drums and shared vocal duties, Jack Lawrence of the Raconteurs played bass, and the Queens of the Stone Age keyboardist and guitarist Dean Fertita rounded out the four-piece.

In November 2010, producer Danger Mouse announced that White—along with Norah Jones—had been recruited for his collaboration with Daniele Luppi entitled Rome.  White provided vocals to three songs on the album: “The Rose with the Broken Neck”, “Two Against One”, and “The World”.  White also appeared on a cover of U2‘s “Love Is Blindness”.

In March 2015, Third Man joined in the launch of TIDAL, a music streaming service that Jay-Z purchased and co-owns with other major music artists. Later that year, White partnered with the watch manufacturer Shinola to open a retail location in Detroit.

He drew inspiration from rap artists of the 1980s and 1990s (as well as A Tribe Called Quest, Kanye West, and Nicki Minaj), and chose his backing musicians from talent that played supporting hip hop artists live.

White has worked with other artists as well, including Beck, the Rolling Stones, Jeff Beck, Bob Dylan, and Insane Clown Posse.

Hire Jack White for your party or event!

Jack White may be available for your next special event!

Frequently Asked Questions About How To Hire JACK WHITE for a private party or special event.

HOW TO BOOK JACK WHITE?
(i.e., how to hire JACK WHITE for an event)

Include information about your plans for your event and how taking steps to hire JACK WHITE (or someone similar) might be of special interest.

Official booking fees for JACK WHITE, or any other celebrity, are determined based on a number of factors and may change at anytime without prior notice.

IS JACK WHITE AVAILABLE TO WORK MY EVENT?
(i.e., what is JACK WHITE‘s availability?)