How to Hire ALO For Your Event!

With their rousing stage shows and their home-made debut album “ALO vs. LAG“, the band began drawing enormous attention in the Santa Barbara area.

After finishing up their college degrees that summer, Lebowitz, Adams and Gill embarked on a U.S. acoustic tour with hometown friend Rob Binkley on percussion and called it “BLAG Across America”. When LAG returned home that fall to Saratoga, California, to return to ALO, they stripped down to a quartet, first pairing up with drummer Shree Shyam Das.

Shortening their name to ALO, this new line-up plugged themselves into the SF music scene and recorded continuously, releasing a couple of albums including “One Size Fits All” and “Time Expander“, while archiving the rest. 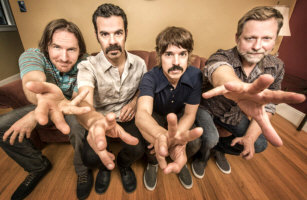 Hire ALO to entertain at a company’s special event!

After Das left the band to pursue other musical interests, the band took a short break but soon returned in the spring of 2002 playing with a variety of new drummers, including Matt Butler and Adam Goodhue. In the fall of 2002, Lebowitz, Adams and Gill reunited with Brogan and the current version of ALO was solidified.

Hire ALO: ALO is an adventure, it’s a Spring break road trip to Colorado, it’s an all-night drive from Salt Lake City to San Jose. It’s the comfort of hanging out with life-long friends, of relaxing on a couch and finding treasures hidden in its cushions. It feels old and new, fresh and classic. It holds tension and dreams and possibility in its folds. It hopes to unveil something magical, something unheard of, something the world needs.

Hire ALO: It’s a sound of growing up in the San Francisco Bay Area. It’s a sound of northern California, with sprinkles of Santa Barbara and Augusta, Georgia. It was born of childhood friendships, of shared destinies, of inside jokes and of a desire to make people happy.

It’s not for everyone, although it tries to be. It wants you to love and share in its vision. It’s long and meandering, then suddenly sharp, abrupt! It’s feral and clever, and it means you no harm. It’s love and freedom, collected and catalogued, then released back into the wilds from whence it came, over and over again. It’s an orchestrated liberation of our animal soul. It’s ALO.

Hire ALO for your party or event!

ALO may be available for your next special event!

Frequently Asked Questions About How To Hire ALO for a private party or special event.

Include information about your plans for your event and how taking steps to hire ALO (or someone similar) might be of special interest.

Official booking fees for ALO, or any other celebrity, are determined based on a number of factors and may change at anytime without prior notice.

IS ALO AVAILABLE TO WORK MY EVENT?
(i.e., what is ALO‘s availability?)