How to Hire TRAIN For Your Event!

Train began in 1994 when Pat Monahan, an Erie, Pennsylvania, native living in Los Angeles, met Rob Hotchkiss (who left the band in 2003). After moving to San Francisco and appearing in coffeehouses as an acoustic duo, they added Colin (bass) and Stafford (guitar), who, like Hotchkiss, were veterans of the Apostles, an L.A. band. Scott Underwood came on board as drummer shortly afterward.

In 1996, the band went to New York City to play a showcase date for Columbia Records. The company turned them down. “We decided maybe they were right,” Monahan said years later, “We made a lot of changes with the band, and I changed in my life, by asking myself how I could be a better bandmate, friend, husband, and father.” 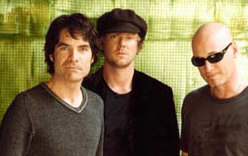 Hire Train for your festival or concert plans!

In 1996, Train attempted to get signed under Columbia Records, but were rejected. Subsequently, the band decided to release their first self-titled CD independently.

By 1997, they were touring nationally, opening concerts for bands, such as Barenaked Ladies, Hootie & the Blowfish, Cracker and Counting Crows.

In February 1998, Train was picked up by Aware/Columbia, and the band hit the road in a rundown 1987 Dodge Ram van with a little red trailer. It stayed on the road for the next two years.

In November 1999, the album was certified RIAA gold. It went platinum in March 2000.

Early in 2000, Train took a break from the road to begin recording a new album with producer Brendan O’Brien. The band recorded for the rest of the year, between headlining tour dates, and making television appearances.

Drops of Jupiter, the band’s second album, was produced by Brendan O’ Brien, who has also worked with artists such as Pearl Jam, King’s X, Bob Dylan, Bruce Springsteen & The E-Street Band and Neil Young.

When Drops of Jupiter arrived on March 27, 2001, its title track, “Drops Of Jupiter (Tell Me),” was already a hit on several Billboard charts. The song’s undeniable hook and lush orchestration by Paul Buckmaster won over scores of new fans and radio listeners.

By June, “Drops of Jupiter” was RIAA-certified platinum. By April 2002, the single had spent a total of 53 weeks on the Hot 100. It won a Best Rock Song Grammy for Train, as well as a Best Arrangement Grammy for Buckmaster.

The release of “My Private Nation” in June 2003 reflects the change and growth spurred by the “Drops of Jupiter” whirlwind. As Scott puts it, “Spiritually and culturally we’ve all grown tremendously. We’re very close, we know each other so well, but right now it’s nice to know how to completely live in this world as professional musicians.”

In November 2012, Train released “Bruises”, a country-oriented duet with Ashley Monroe. The song has also been recorded with different female singers: For Canada, the song was recorded in both English and French with Marilou, and for Australia with Delta Goodrem.

On the January 26, 2013, airing of Saturday Night Live, the band was parodied in the “Band Face-Off” sketch where they invade a bar and get in a conflict with Adam Levine, and are later joined by Jason Mraz and John Mayer. Train made a statement afterwards that they approved of the parody.

On April 14, 2022, the first promotional single from the album was released, entitled “Running Back (Trying to Talk to You)”.

On May 6, 2022, the second promotional single, titled “Turn the Radio Up” featuring Jewel was released.

On May 18, 2022, the third and final promotional single, titled “Cleopatra” featuring Sofía Reyes was released.

Hire Train for your party or event!

Train may be available for your next special event!

Frequently Asked Questions About How To Hire TRAIN for a private party or special event.

HOW TO BOOK TRAIN?
(i.e., how to hire TRAIN for an event)

Include information about your plans for your event and how taking steps to hire TRAIN (or someone similar) might be of special interest.

Official booking fees for TRAIN, or any other celebrity, are determined based on a number of factors and may change at anytime without prior notice.

IS TRAIN AVAILABLE TO WORK MY EVENT?
(i.e., what is TRAIN‘s availability?)