How to Hire COUNTING CROWS For Your Event!

Counting Crows gained popularity following the release of its first album, August and Everything After (1993). With the breakthrough hit single “Mr. Jones” (1993), the album sold more than 7 million copies in the United States.

The band received two Grammy Awards nominations in 1994, one for “Best Rock Performance by a Duo or Group with Vocal” (for “Round Here”) and one for “Best New Artist”. The follow-up album, Recovering the Satellites, reached number one on the US Billboard 200 album chart and reached number one in several other countries. All but one of their subsequent albums was top 10 on the Billboard 200 list.

The band’s influences include Van Morrison, R.E.M., and Bob Dylan. The band has sold more than 20 million albums worldwide.

Supporters flocked to an album that was as moody and introspective as Pearl Jam or Nirvana but was rooted in the less bruising strains of Van Morrison, the Band, and R.E.M.

Months before they released their first record, they were hand-picked by Robbie Robertson to stand in for an absent Van Morrison at the Rock & Roll Hall of Fame induction ceremony in 1993. 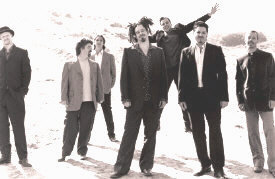 As songwriter, decision-maker, and most visible member, Adam Duritz occupies the center of Counting Crows. Both “August and Everything After” and 1996’s “Recovering the Satellites” tap into a lifetime of Duritz’s experiences, frustrations, and observations.

After final mixes by producer Scott Litt (R.E.M., Indigo Girls) and the addition of “Raining in Baltimore,” “August and Everything After” was complete. The band hit the road to open up for a diverse group of artists, including The Cranberries, Suede, and Midnight Oil.

For their second album, Counting Crows relied on the same setup that spawned “August and Everything After.” “Recovering the Satellites,” released in October of 1996, stepped away from the derivative sounds of the first Counting Crows record.

Six of the band’s albums have charted on the Billboard 200 and four have been certified gold or platinum by the Recording Industry Association of America.

Overall, Counting Crows has been recognized and awarded for their contributions to the music industry and their success as a band.

Hire Counting Crows for your party or event!

Counting Crows may be available for your next special event!

Frequently Asked Questions About How To Hire COUNTING CROWS for a private party or special event.

Include information about your plans for your event and how taking steps to hire COUNTING CROWS (or someone similar) might be of special interest.

Official booking fees for COUNTING CROWS, or any other celebrity, are determined based on a number of factors and may change at anytime without prior notice.