How to Hire Daryl Hall and John Oates For Your Event!

Previously known as: Hall and Oates

Hall & Oates‘ music was remarkably well-constructed and produced; at their best, their songs were filled with strong hooks and melodies that adhered to soul traditions without being a slave to them by incorporating elements of new wave and hard rock.

Hire Daryl Hall and John Oates for your festival or concert plans!

On their first records – “Whole Oates” (1972), “Abandoned Luncheonette” (1973), “War Babies” (1974) – the duo were establishing their sound, working with producers like Arif Mardin and Todd Rundgren and removing much of their folk influences. At the beginning of 1974, the duo relocated from Philadelphia to New York.

After they moved to RCA in 1975, the duo landed on its successful mixture of soul, pop and rock, scoring a Top Ten single with “Sara Smile.” The success of “Sara Smile” prompted the re-release of “She’s Gone,” which rocketed into the Top Ten as well.

Released in the summer of 1976, “Bigger than the Both of Us” was only moderately successful upon its release. The record took off in early 1977, when “Rich Girl” became the duo’s first number one single. 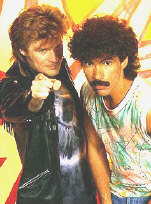 Although they had several minor hits between 1977 and 1980, the albums Hall & Oates released at the end of the decade were not as successful as their mid-’70s records. Nevertheless, they were more adventurous, incorporating more rock elements into their blue-eyed soul.

The combination would finally pay off in late 1980, when the duo released the self-produced “Voices,” the album that marked the beginning of Hall & Oates‘ greatest commercial and artistic success.

The first single from “Voices,” a cover of the Righteous Brothers’ “You’ve Lost That Lovin’ Feeling,” reached number 12, yet it was the second single, “Kiss on My List” that confirmed their commercial potential by becoming the duo’s second number one single; its follow-up, “You Make My Dreams,” hit number five. 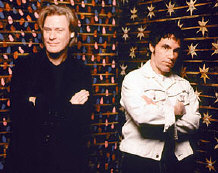 “H20” followed in 1982 and it proved more successful than their two previous albums, selling more than two million copies and launching their biggest hit single, “Maneater,” as well as the Top Ten hits “One on One” and “Family Man.”

In April of 1984, the Recording Industry Association of America announced that Hall & Oates had surpassed the Everly Brothers as the most successful duo in rock history, earning a total of 19 gold and platinum awards.

Released in October of 1984, “Big Bam Boom” expanded their number of gold and platinum awards, selling more than two million copies and launching four Top 40 singles, including the number one “Out of Touch.”

The title of their first album in seven years suggests a place of wide-open spaces and unlimited possibilities. “Marigold Sky” finds Daryl Hall and John Oates building on their pioneering rock, soul and pop musical hybrid by continuing to creatively blur the lines between genres.

The Philadelphia-originated duo is one of the most popular and enduring collaborations of the rock era – according to Billboard magazine they are the best-selling duo of all time. They are eligible for the Rock and Roll Hall of Fame.

Hall & Oates are considered one of the most successful duos in the history of rock and roll. They have received numerous awards and accolades over the course of their career, including:

Hall & Oates have also been recognized for their contributions to music by receiving stars on the Hollywood Walk of Fame.

Hire Daryl Hall and John Oates for your party or event!

Daryl Hall and John Oates may be available for your next special event!

Frequently Asked Questions About How To Hire DARYL HALL and JOHN OATES for a private party or special event.

Include information about your plans for your event and how taking steps to hire DARYL HALL and JOHN OATES (or someone similar) might be of special interest.

Official booking fees for DARYL HALL and JOHN OATES, or any other celebrity, are determined based on a number of factors and may change at anytime without prior notice.