How to Hire IMAGINE DRAGONS For Your Event! 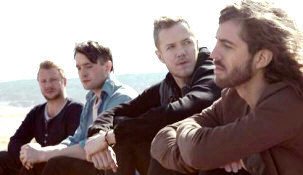 Hire Imagine Dragons for your festival or concert plans!

The band first gained exposure with the release of their single “It’s Time”, followed by their award-winning debut studio album, Night Visions (2012), which resulted in the chart-topping singles “Radioactive” and “Demons”.

Rolling Stone named “Radioactive”, which held the record for most weeks charted on the Billboard Hot 100, the “biggest rock hit of the year”.

In February of 2015, the band planned to take a hiatus. They released the soundtracks songs “Not Today” from Me Before You and “Sucker for Pain” from Suicide Squad with Lil Wayne, Wiz Khalifa, Logic, Ty Dolla Sign, and X Ambassadors in April and June, respectively.

Dan Reynolds cites Arcade Fire, Nirvana, Muse, The Beatles, Paul Simon, Coldplay, Linkin Park, Harry Nilsson, and U2 as some of his and the band’s artistic influences. In terms of success, Reynolds credits bands like Foster the People and Mumford & Sons for bringing alternative pop music to a new level of commercial success in recent years.

Imagine Dragons has sold more than 75 million records worldwide, making them one of the world’s best-selling music artists. They were the most streamed group of 2018 on Spotify and are the first rock act to have four songs, “Radioactive”, “Demons”, “Believer”, and “Thunder”, to surpass one billion streams each. According to Billboard, “Believer”, “Thunder”, and “Radioactive” were the three best performing rock songs of the 2010s.

Hire Imagine Dragons for your party or event!

Imagine Dragons may be available for your next special event!

Frequently Asked Questions About How To Hire IMAGINE DRAGONS for a private party or special event.

Include information about your plans for your event and how taking steps to hire IMAGINE DRAGONS (or someone similar) might be of special interest.

Official booking fees for IMAGINE DRAGONS, or any other celebrity, are determined based on a number of factors and may change at anytime without prior notice.