How to Hire DROPKICK MURPHYS For Your Event!

Hire Dropkick Murphys:
Dropkick Murphys are an American Celtic punk band formed in Quincy, Massachusetts in 1996. Singer and bassist Ken Casey has been the band’s only constant member.

The band was initially signed to independent punk record label Hellcat Records, releasing five albums for the label, and building a reputation locally through constant touring and yearly St. Patrick’s Day week shows, held in and around Boston. The 2004 single, “Tessie” became the band’s first mainstream hit and one of their biggest charting singles to date. 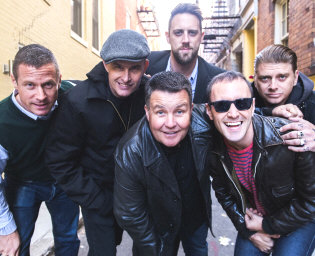 Hire Dropkick Murphys for your festival or concert plans!

The band’s early influences were punk bands like Greenland Whalefishers, Swingin’ Utters, the Ramones, the Clash, and Sex Pistols, as well as the Pogues and Irish bands such as Stiff Little Fingers and the Dubliners.  While frequently referred to as a Celtic punk band, some of their earlier material has also been classified under other punk rock subgenres like Oi!, street punk and hardcore punk.

Celtic punkers Dropkick Murphys condense a drunken day at an Irish pub into albums, such as “The Meanest of Times”, which Rolling Stone magazine called one of “2007’s Fifty Best”. Famous for its love of the Boston Red Sox, Dropkick Murphys released the hit “Tessie” which was the theme song to the Sox’s World Series run in 2004. 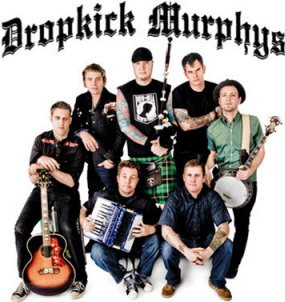 On April 22, 2009, the Dropkick Murphys joined Bruce Springsteen & the E Street Band on stage in Boston for his Working on a Dream Tour, playing “Glory Days” and “American Land”. During the show, guitarist Tim Brennan proposed to his girlfriend Diana onstage, which was followed by a performance of the Springsteen song “So Young And in Love”.

The following month the band opened for Aerosmith at the Comcast Center in Mansfield, Massachusetts, in a “Hometown Heroes” concert; they later joined Aerosmith onstage to perform “Dirty Water”.

The band is known for their loud, energetic live shows.  They frequently cite AC/DC as an influence on their formula of maintaining a specific style, with Casey once saying “I think our goal is to be the AC/DC of Celtic punk rock. The worst thing we can do to the local fans who have stuck with us is to all of a sudden try to be Fall Out Boy with bagpipes.”

Al Barr commented “We’ve always said we’re like the Ramones or AC/DC with what we do; if it ain’t broke, don’t fix it. But at the same time, we have to keep challenging ourselves. And if we find that tunes we’re putting together for a record are boring us, we’re not going to record them.”

Hire Dropkick Murphys for your party or event!

Dropkick Murphys may be available for your next special event!

Frequently Asked Questions About How To Hire DROPKICK MURPHYS for a private party or special event.

Include information about your plans for your event and how taking steps to hire DROPKICK MURPHYS (or someone similar) might be of special interest.

Official booking fees for DROPKICK MURPHYS, or any other celebrity, are determined based on a number of factors and may change at anytime without prior notice.