How to Hire THE HEAD AND THE HEART For Your Event!

The members met and the band was formed through a series of open mic nights at Seattle’s Conor Byrne pub in Ballard, Seattle. 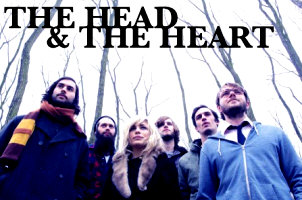 Hire The Head and the Heart for your festival or concert plans!

Josiah Johnson had moved to Seattle from Southern California to attend graduate school, and Jonathan Russell had recently relocated from Richmond, Virginia. They met keyboardist Kenny Hensley, who had also moved to Seattle to pursue musical score-writing, and Charity Rose Thielen, who had recently returned from a year studying abroad in Paris at Sciences Po.

Drummer Tyler Williams had been in the band Prabir and The Substitutes in Richmond, Virginia and moved to Seattle to be a part of the Head and The Heart after hearing a demo that Russell sent of the song “Down In The Valley”. Chris Zasche was bartending at the Conor Byrne Pub, working aftercare shifts at The Perkins School, and playing in Seattle bands The Maldives and Grand Hallway. He was the last to be added to original lineup.

Josiah Johnson explained how the name of the band was chosen: “Your head is telling you to be stable and find a good job, you know in your heart that this [the band] is what you’re supposed to do even if it’s crazy.”

In 2010 and 2011 the band toured extensively through in both the United States and Europe, and opened for Vampire Weekend, The Walkmen, Dr. Dog, Dave Matthews, The Low Anthem, The Decemberists, Iron & Wine, My Morning Jacket, and Death Cab For Cutie, as well as headlining their own shows.

In October of 2013, the band’s second album, Let’s Be Still, was released. Frontman Johnson said of it “…this is the first time that we produced as a full band. This one is everyone’s influences equally present and prevalent throughout the album”.

James Christopher Monger of AllMusic said of the album: “The group’s predilection for heartfelt, Avett Brothers-meets-Fleet Foxes roots rock is apparent right out of the gate with “Homecoming Heroes” and “Another Story,” both of which utilize familiar folk-rock architecture to spin earnest and familiar tales concerning the two body parts from which the group takes its name.”

On November 2, 2013, Let’s Be Still reached number 10 on the Billboard 200 albums chart. The band spent much of 2014 touring in support of the album. Thielen spent time writing for other artists, including Mavis Staples, while she married fellow musician Matt Gervais.

Hire The Head and the Heart for your party or event!

The Head and the Heart may be available for your next special event!

Book The Head and the Heart, now!

– Hire The Head and The Heart –

Frequently Asked Questions About How To Hire THE HEAD AND THE HEART for a private party or special event.

Include information about your plans for your event and how taking steps to hire THE HEAD AND THE HEART (or someone similar) might be of special interest.

Official booking fees for THE HEAD AND THE HEART, or any other celebrity, are determined based on a number of factors and may change at anytime without prior notice.