How to Hire THE DECEMBERISTS For Your Event!

Their debut EP, 5 Songs, was self-released in 2001. Their eighth and latest full-length album I’ll Be Your Girl was released on March 16, 2018, by Capitol Records, and is the band’s fifth record with the label.

In addition to their lyrics, which often focus on historical incidents and/or folklore, the Decemberists are also well known for their eclectic live shows. Audience participation is a part of each performance, typically during encores. The band stages whimsical reenactments of sea battles and other centuries-old events, typically of regional interest, or acts out songs with members of the crowd. 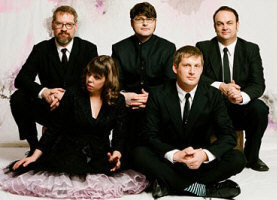 Hire The Decemberists for your festival or concert plans!

In 2011, the track “Down by the Water” from the album The King Is Dead was nominated for Best Rock Song at the 54th Grammy Awards.

The Decemberists‘ songs range from upbeat pop to instrumentally lush ballads, and often employ instruments like the accordion, keyboards, and upright bass. In its lyrics, the band eschews the introspection common to modern rock, instead favoring a storytelling approach.

Hire the Decemberists for your party or event!

The Decemberists may be available for your next special event!

Frequently Asked Questions About How To Hire THE DECEMBERISTS for a private party or special event.

Include information about your plans for your event and how taking steps to hire THE DECEMBERISTS (or someone similar) might be of special interest.

Official booking fees for THE DECEMBERISTS, or any other celebrity, are determined based on a number of factors and may change at anytime without prior notice.