How to Hire OZOMATLI For Your Event!

Hire Ozomatli:
GRAMMY AWARD and LATIN GRAMMY AWARD winning Ozomatli is an American rock band, formed in 1995 in Los Angeles. They are known both for their vocal activist viewpoints and incorporating a wide array of musical styles – including salsa, jazz, funk, reggae, hip hop, and others. To date, they have released seven studio albums.

Ozomatli is an Aztec word for the God of dance and appears on the Aztec calendar in the form of a monkey. Ozomatli is an eclectic conglomeration, fusing a wild variety of music. At its core, the group is a dance band, blending funk, hip-hop, Latin rhythms, jazz, salsa, reggae, Tejano, and worldbeat into its sound. 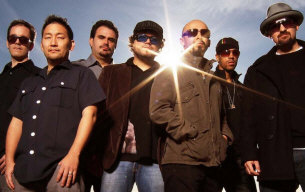 Hire Ozomatli for a memorable evening of entertainment!

Ozomatli began their career in the Los Angeles and San Diego/Mexico border-area club scene. Following an appearance on Vibe!, the group broke into the mainstream, releasing “Ozomatli,” their self titled debut album, in June 1998. under the Almo Sounds label. They released “Embrace the Chaos” in 2001, and “Street Signs” in 2004, with Interscope and Concord Jazz, respectively. Eddie Palmieri, who is also on the Concord Jazz label, is a featured performer on “Street Signs.” 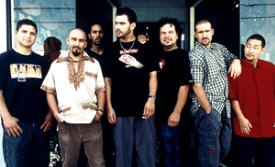 Hire Ozomatli for that special anniversary!

During the 2000 Democratic National Convention Ozomatli played a live concert before thousands of protestors across the street from the convention hall. Also performing at the protest was Rage Against The Machine.

The group also received the 2002 Grammy Award for ‘Best Latin Rock/Alternative Album’. After playing at Coachella, Ozomatli were featured in Newsweek and on the Univision program Despierta America in June 2004.

In March 2005, Ozomatli played at WOMAdelaide, a world music festival in Adelaide, South Australia. They had two night sets, including a memorable Saturday when, after refusing to leave the stage 15 minutes late, they leaped into the crowd for a remarkable 45 minute encore.

Ozomatli have caused an immediate sensation with their incendiary live shows and hyperkinetic mix of styles that bridge the gap between African, Latin and American music.

Originally, Ozomatli only played political benefits, but word spread and kids were appearing on the streets of Los Angeles with ‘Ozo’ tattoos. “We represent all the ghettos of LA,” Wil-Dog says. “We want to make a change in our neighborhoods, show people a positive way to live.” He adds, “I knew we had something special the first day we played,” says Wil-Dog, “I’d never been in a band that just wanted to party, to have fun and still be about something.”

Hire Ozomatli for your party or event!

Ozomatli may be available for your next special event!

Frequently Asked Questions About How To Hire OZOMATLI for a private party or special event.

HOW TO BOOK OZOMATLI?
(i.e., how to hire OZOMATLI for an event)

Include information about your plans for your event and how taking steps to hire OZOMATLI (or someone similar) might be of special interest.

Official booking fees for OZOMATLI, or any other celebrity, are determined based on a number of factors and may change at anytime without prior notice.

IS OZOMATLI AVAILABLE TO WORK MY EVENT?
(i.e., what is OZOMATLI‘s availability?)