How to Hire TOBY KEITH For Your Event!

Hire Toby Keith:
Toby Keith Covel (born July 8, 1961) is an American country music singer, songwriter, actor, and record producer.
He began playing guitar at age 8, but it would be years before Keith would pursue music as a career. 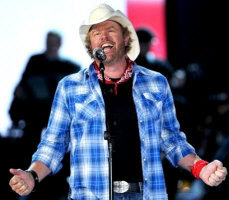 Hire Toby Keith for your festival or concert plans.

He grew up in Moore, Oklahoma, with twin passions for music and sports. He began playing football at five. At eight, in imitation of the musicians who appeared at his grandmother’s supper club, he started playing guitar.

Toby Keith worked as a rodeo hand in high school, then took a job in the oil fields after graduation. He also formed the Easy Money band and played local honky-tonks on weekends. He worked on the oil rigs in Oklahoma, where he worked his way up to operational manager (he worked 70 hour weeks running casing on a drilling rig).

After three years in the oil fields, the industry hit a major slump, and Toby cast his eye back toward sports. He played two years as a defensive end for the Oklahoma City Drillers, a semi-pro team, all the while continuing to perform with his band. While playing with the Drillers, he tried out for the Oklahoma Outlaws of the ill-fated USFL.

Hire Toby Keith to entertain at your company’s special event!

When that league folded, Toby Keith reassessed his life, deciding that despite the odds, he needed to pour himself into music. So he and Easy Money hit the road. Toby concentrated on his writing, putting together a demo tape that made a fan of former Alabama producer Harold Shedd.

This led to Toby signing with Mercury Records and releasing a self-titled album that resulted in three #1 hits, “Should’ve Been A Cowboy,” “Wish I Didn’t Know Now” and “A Little Less Talk And A Lot More Action,” and the #5 hit “He Ain’t Worth Missing.

He became nationally successful in 1993 with four hits from his debut CD – three of which he wrote. The record spawned the Top 10 singles “Should’ve Been a Cowboy,” “He Ain’t Worth Missing” and “A Little Less Talk and a Lot More Action” and soon went platinum. Toby Keith was named Top New Country Artist by Billboard Magazine.

He returned in 1994 with “Boomtown,” a gold-selling following, and “Christmas to Christmas,” a collection of Christmas favorites. 1996’s “Blue Moon,” produced by Keith himself, was another huge success, as was 1997’s “Dream Walkin’.”

In 2021, Keith featured on the Brantley Gilbert single “The Worst Country Song of All Time” with Hardy. Toby Keith resided on the charts for a year, earning double-platinum certification.

Hire Toby Keith for your party or event!

Toby Keith may be available for your next special event!

Frequently Asked Questions About How To Hire TOBY KEITH for a private party or special event.

HOW TO BOOK TOBY KEITH?
(i.e., how to hire TOBY KEITH for an event)

Include information about your plans for your event and how taking steps to hire TOBY KEITH (or someone similar) might be of special interest.

Official booking fees for TOBY KEITH, or any other celebrity, are determined based on a number of factors and may change at anytime without prior notice.

IS TOBY KEITH AVAILABLE TO WORK MY EVENT?
(i.e., what is TOBY KEITH‘s availability?)