How to Hire BIG & RICH For Your Event!

Hire Big & Rich:
Big & Rich is an American country music duo composed of Big Kenny and John Rich, both of whom are songwriters, vocalists, and guitarists.

Before the duo’s foundation, John Rich was bass guitarist in the country band, Lonestar, while Big Kenny was a solo artist for Hollywood Records. 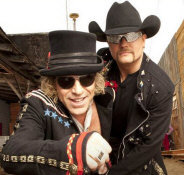 Hire Big & Rich for your festival or concert plans!

Hire Big & Rich:
The universe of Big & Rich is a rollicking moveable feast inhabited by a cast of indelible characters, starting with Messrs. Big and Rich themselves. One’s a six-foot-three former carpenter with a rep as Nashville’s universal minister of love and a backlog of songs ranging from country laments to psychedelic rockers to something called “Disco Ball.” The other’s shorter, slyer and younger, a Texan with an angelic voice and a wicked gleam in his eye.

Hire Big & Rich —
Big & Rich are throwing a party, and it’s important to them that you understand everybody is invited. They can be wild and wooly and uproariously funny, but there’s a method to their madness: these guys aren’t always serious, but you’re selling them short if you think they’re always kidding.

Hire Big & Rich —
When John Rich met Big Kenny in 1998, both had been through the record industry wringer. The stories are typical, the details unimportant. John was in a band, he had hits, he went solo, he scrambled for attention and a new record deal. Big Kenny, who didn’t become a full-time musician until he was in his thirties, got a big record deal but saw the ensuing album go nowhere, then fronted a wild outfit called luvjOi.

Hire Big & Rich —
John Rich and Big Kenny became friends and writing partners, and they kept jamming at each other’s shows and clambering onstage with singer-songwriter pals like James Otto and Jon Nicholson. The casual sessions soon turned into a weekly Tuesday night gig at a small Nashville establishment called the Pub of Love. “We wanted to do it on the worst night of the week in the weirdest place in town,” says John. “So that if anybody showed up, they’d be there because they wanted to hear music, not because they wanted to schmooze.”

The sessions were dubbed the Muzik Mafia, and they grew to involve far more than just John, Big Kenny and their immediate circle of friends. “It was every style of music,” says John. “We’ve had everyone come in from Randy Scruggs to Saliva. We had fiddle players, jugglers, guys blowing fire out of their mouths.”

Hire Big & Rich —
“As the Mafia kept going,” says Big Kenny, “we watched it go from twenty people to three or four hundred people, slamming in the joint. And that kind of made us think, Hell, people love what we do, why worry about what anybody will accept? If I’m good by myself and you’re good by yourself, and we come together, we can be even better and more insane.”

Hire Big & Rich —
The Muzik Mafia also helped get Big & Rich signed to Warner Bros. Nashville. Paul Worley, the company’s new chief creative officer, already knew the pair’s songs. Worley had produced the Martina album with Martina McBride; it included “She’s a Butterfly,” which John and Kenny had written after meeting a teenage girl who was suffering from brain cancer at Vanderbilt Children’s Hospital. Worley’s daughter was also a regular at the Muzik Mafia shows, and at her urging he met them in his new office.

“We thought we had a meeting with him to pitch songs for Martina,” says Kenny. “After we did a few of those songs, he said, ‘I understand you have this Muzik Mafia thing going, this Big & Rich thing. Play me some of that.’ I said, ‘Dude, that ain’t nothing you’re going to want to cut on anybody.’ But he said he wanted to hear it anyway. So we played him three songs, and he stood up, slammed his fist down on the table and said, ‘By God, boys, I want to do this!’ 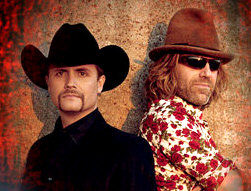 Hire Big & Rich:
Musically, John and Big Kenny cover a wide territory. They play country music, but country music that has room for echoes of everything from the Everly Brothers to Limp Bizkit to Queen, from honky tonk to rock ‘n’ rap. “Charley Pride was the man in black,” they sing in their anthem, “Rollin’ (The Ballad of Big and Rich).” “Rock ‘n’ roll used to be about Johnny Cash.”

Hire Big & Rich For Your Party or Event!

Big & Rich may be available for your next special event!

Frequently Asked Questions About How To Hire BIG & RICH for a private party or special event.

Include information about your plans for your event and how taking steps to hire BIG & RICH (or someone similar) might be of special interest.

Official booking fees for BIG & RICH, or any other celebrity, are determined based on a number of factors and may change at anytime without prior notice.

IS BIG & RICH AVAILABLE TO WORK MY EVENT?
(i.e., what is BIG & RICH‘s availability?)