How to Hire TRISHA YEARWOOD For Your Event!

Possessing a vocal ability that can convey any emotion, Trisha Yearwood dances through distinct facets of country, folk, rock and pop with unashamed interpretation and breathtaking verse.

Hire Trisha Yearwood for your festival or concert plans.

After signing with MCA Nashville in 1990 and releasing her debut single “She’s In Love With The Boy” (which went to #1), the floodgates burst open. The next year, “Trisha Yearwood” became the first debut album by a female country artist to ever reach platinum status, thus firmly establishing the young singer as an important new voice in music.

Hire Trisha Yearwood to entertain at your company’s special event!

An armory of hits has propelled her career continuously upwards, with her seven subsequent albums selling in excess of thirteen million copies. In addition, she has earned ten #1 singles, nine top-10’s, three Grammy Awards, multiple Country Music Association and Academy of Country Music Awards and an American Music Award (among others).

Her song “How Do I Live” (written by Diane Warren and featured in the movie “Con-Air”) was nominated for an Oscar, giving Trisha an opportunity in 1998 to fulfill a dream – a performance on the Academy Awards.

Her work has earned her several awards and nominations, including three Grammy Awards, three awards from the Academy of Country Music, and three awards from the Country Music Association. Yearwood has also been a cast member of the Grand Ole Opry since 1999. Since 2005 she has been married to country singer, Garth Brooks, with whom she has collaborated on a number of occasions.

In 1992, Yearwood released her second studio album, Hearts in Armor. The album was a departure from her previous material, containing ballads and collaborations with Don Henley, Emmylou Harris, and Raul Malo.

Music critics praised the album. Allmusic called the album “stunning” and “one of the best heartbreak records country music delivered in the ’80s and ’90s.” About.com gave it five stars and called Hearts in Armor “possibly Trisha’s best album ever.”

Yearwood released her third album in 1993 entitled The Song Remembers When. The title track reached number two on the Billboard country chart that year. The record was recorded in a similar musical style to Hearts in Armor, differing with more contemporary arrangements. The album also included collaborations with other artists, such as Rodney Crowell and Willie Nelson.

In 2019, Yearwood announced plans for her twelfth studio album, Every Girl. Its lead single “Every Girl in This Town” was issued in June 2019. The song debuted at number 21 on the Billboard Country Airplay chart, marking the highest chart debut of her career. Every Girl was released in August 2019. It featured collaborations with Garth Brooks, Kelly Clarkson, and Don Henley.

In 2019, Yearwood hosted the tenth annual CMA Country Christmas. The special was taped in September 2019 and featured performances by various artists including Tori Kelly, CeCe Winans and Brett Young.

Peer recognition and project involvement are also indicative of Yearwood’s depth.  She won a Grammy for Best Country Vocal Collaboration in 1994 for her rendition of “I Fall To Pieces” with Aaron Neville, and again in 1998 for “In Another’s Eyes,” her first duet with Garth Brooks.

R & B artist/producer R. Kelly requested to work with her on a track for the motion picture “Life.” An in-demand duet partner/harmony vocalist, she has also performed, either on record or live on stage, with Mary Chapin Carpenter, Natalie Cole, Bob Dylan, Whitney Houston, Emmylou Harris and Brian McKnight (among others). 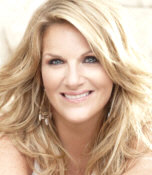 Trisha Yearwood has crafted a musical career that is not only timely, but timeless. Day by day, she has earned success alongside only a handful of others not content with the immediacy of trend or compromise. Fortunately for her, the rewards have duly arrived. Fortunately for music lovers, the inspiration and virtue remain intact.

Hire Trisha Yearwood for your party or event!

Frequently Asked Questions About How To Hire TRISHA YEARWOOD for a private party or special event.

Include information about your plans for your event and how taking steps to hire TRISHA YEARWOOD (or someone similar) might be of special interest.

Official booking fees for TRISHA YEARWOOD, or any other celebrity, are determined based on a number of factors and may change at anytime without prior notice.