How to Hire BRIAN MCKNIGHT For Your Event!

His expansive repertoire has always been rooted in the gospel and jazz on which he was weaned while growing up in Buffalo, New York – reared in a musical family that includes older brother Claude McKnight, a founding member of the vocal group, Take 6.

Hire Brian McKnight for your festival or concert plans.

Brian McKnight was proficient on keyboards, guitar and trumpet by high school years and leading his first band, a jazz-fusion unit at the age of 17. After tenure at Oakwood, a Christian College in Huntsville, Alabama, he met longtime co-writing partner Brandon Barnes and began recording demos. He signed with the Mercury label at age 19.

His first album, 1992’s “Brian McKnight” (which featured the classic ballad, “One Last Cry”), and 1995’s “I Remember You” (which included the sterling cover of Van Morrison‘s “Crazy Love”), achieved platinum status.

He produced tracks for Boyz II Men‘s “Christmas Interpretations,” scored a Top 3 duet with Vanessa Williams‘ “Love Is,” sang on Quincy Jones’ “Q’s Jook Joint,” appeared on the soundtrack of “The Addams Family,” performed “Signed, Sealed, Delivered (I’m Yours)” on the NBA “AT 50” compilation.

Also, he recorded with Diana King the title track of the Academy Award-winning Muhammad Ali documentary, “When We Were Kings,” and has produced Take 6, Chico DeBarge, and Xscape among others.

McKnight‘s blossoming brand power was in full effect in 1998 when Motown, Mercury’s sister label, released Anytime. Collaboration-choked with such A-list players as songwriter Diane Warren, Mary J. Blige, and the Trackmasters production team, the LP’s combustive first single, the top 20 pop hit, “You Should Be Mine,” a collaboration with hip-hop superstar Sean “Puffy” Combs, immediately took off. 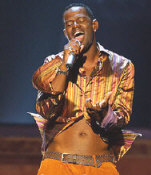 Hire Brian McKnight to entertain at that special anniversary.

Brian McKnight closed out 1998 with “Bethlehem,” his very first collection of Christmas songs. He also participated in the inspirational soundtrack from the Dreamworks animated epic “Prince of Egypt” and the accompanying NBC-TV special.

Hire Brian McKnight for your party or event!

Brian McKnight may be available for your next special event!

Frequently Asked Questions About How To Hire BRIAN McKNIGHT for a private party or special event.

Include information about your plans for your event and how taking steps to hire BRIAN McKNIGHT (or someone similar) might be of special interest.

Official booking fees for BRIAN McKNIGHT, or any other celebrity, are determined based on a number of factors and may change at anytime without prior notice.