How to Hire ALABAMA For Your Event!

Alabama‘s biggest success came in the 1980s, where the band had over 27 number one hits, seven multi-platinum albums and received numerous awards.

Alabama has more than 41 number one country records on the Billboard charts to their credit and have sold more than 75 million records, making them the most successful band in country music history. AllMusic credited the band with popularizing the idea of a country band and wrote that “It’s unlikely that any other country group will be able to surpass the success of Alabama.” 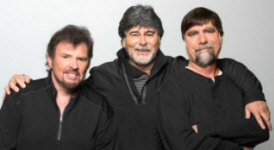 Hire Alabama for your festival or concert.

Alabama was inducted into the Musicians Hall of Fame and Museum in 2019 and were awarded with the first ever Lifetime Achievement Award from this institution.

In 1980, the biggest news blast in music was country, thanks to the release of the film Urban Cowboy. Discos changed decor overnight to become country dance clubs and Americans by the millions traded in their loafers for cowboy boots. RCA Records had country’s first platinum-selling album with “Wanted: The Outlaws.”

Though it didn’t grab many headlines at the time, the label had another important first that year, when on May 31st it released “Tennessee River,” the debut single from a band named Alabama. The song shot to #1, the first of 40 Radio & Records chart toppers.

The band went on to win the Academy of Country Music’s Artist of the Decade title for the 1980’s, sell in excess of 45 million albums, become the first group to ever be named the Country Music Association’s Entertainer of the Year and forever change the way bands were accepted in the country format.

Hire Alabama:
In 1973 the band relocated to Myrtle Beach, South Carolina, to become the house band for a club called The Bowery. Working for tips, they played six nights a week honing the harmonies that would later become a trademark. They stayed seven summers at The Bowery, gaining a huge regional following, changing the band name to Alabama and utilizing one drummer after another before Mark Herndon came into the picture.

Their sound depended on them playing their instruments and Mark adding his drum edge. RCA listened to that sound and agreed and with the major label backing them up, Alabama began to change the way the industry looked at bands. The debut album on RCA was title “My Home’s In Alabama,” and every song released from it became a #1 hit.

The fans kept right on buying Alabama’s albums, too. “Feels So Right” and “Mountain Music” were certified triple platinum in 1984, “Roll On” and “The Closer You Get” were certified double platinum. One of their #1 singles that year, “If You’re Gonna Play In Texas (You Gotta Have a Fiddle In The Band)” is considered one of the most important singles released that year and became one of the all-time most covered tunes by other groups.

Hire Alabama:
Another signature song, “Forty Hour Week (For a Livin’),” was a tribute to America’s working man and hit the top chart sport in 1985. Because of Alabama’s success, more and more bands were getting a shot at stardom: Both Restless Heart and Sawyer Brown emerged in the mid-1980’s and benefited tremendously from Alabama’s ground-breaking work.

Hire Alabama:
You’d think that a band with this much star power might begin to slow down round the time it turned ten years old, but not so with Alabama. In 1990 Alabama released “Jukebox In My Mind,” which became the biggest chart record they’ve had to date, according to the Billboard researcher Joel Whitburn. Another huge single, “I’m In A Hurry (And Don’t Know Why),” stayed #1 for two straight weeks in 1992.

Hire Alabama band for your party or event!

Alabama may be available for your next special event!

Frequently Asked Questions About How To Hire ALABAMA for a private party or special event.

HOW TO BOOK ALABAMA?
(i.e., how to hire ALABAMA for an event)

Include information about your plans for your event and how taking steps to hire ALABAMA (or someone similar) might be of special interest.

Official booking fees for ALABAMA, or any other celebrity, are determined based on a number of factors and may change at anytime without prior notice.

IS ALABAMA AVAILABLE TO WORK MY EVENT?
(i.e., what is ALABAMA‘s availability?)