How to Hire GRETCHEN WILSON For Your Event!

She was born and raised in rural Pocahontas, located 36 miles due east of St. Louis along Interstate 70, where numerous trailer parks are clustered among corn fields and pig farms. Life in the ’70s and ’80s resembled anything but a dream for Gretchen.

Her mother was merely 16 years old when she had Gretchen, and her father, unfortunately, had moved on with his life by the time she was two. In a town, population 727, where a woman is lucky to work as a waitress in a greasy spoon diner like the Powhatan Restaurant, the common gathering point where Pokey Road intersects I-70.

Across the parking lot from the restaurant sits the 12-room single-story Powhatan Motel. Its only competitors – Tahoe Motel and Lighthouse Lodge – sit across the way, as does Denny’s Auto Service, T/G Antique Mall and Jackie’s Country Store Gifts.

Other than that, exit 36 doesn’t offer much to the casual passersby. “It’s basic, but it’s real. It’s me.” Even the locals, at times, are hard to come by, but it’s a place where everyone seems to know one another. More importantly, they not only know you by name, but they also know your kinfolk as well as all your business. 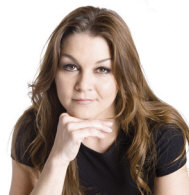 Hire Gretchen Wilson for your festival or concert.

“My mom made a lot of mistakes, but she was young. There were times we only had a little bit and times we didn’t have anything, but she always made sure that we had love.” Life was stressful, to say the least. Whenever they couldn’t “make rent,” which was every few months, they packed up what little belongings they owned and moved on down the road only to find yet another trailer.

With Gretchen Wilson taking care of her brother since she was 10, grandma’s house was definitely more comforting than Big O’s, a rough-and-tumble kicker bar five miles outside of town, set in a cornfield clearing alongside Rural Route 127. With only an eighth-grade education, Gretchen was cooking and tending bar alongside her mom at the age of 14. By the time she was 15 and living on her own, she was managing the roughneck joint with a loaded 12-guage double-barrel shotgun stashed behind the bar for protection.

Living a life like that, it’s no wonder Gretchen Wilson was influenced by singers like Tanya Tucker, Loretta Lynn and, of course, Patsy Cline. “I could feel the pain,” she says, “and I could only imagine what it was like to have an abusive husband and all the different things that she sang about.”

Hire Gretchen Wilson for a memorable evening of excellent entertainment.

If it was her grandma that impacted her musical influence, it was the dad she never really knew who provided her with the musical talent to sing. “My dad just picked around on the guitar and has a quiet voice,” says Gretchen, who made it a point to meet him for the first time when she was 12. “His family, I’m told, had a little traveling band. I think it was a gospel band.”

In any case, from an early age Gretchen Wilson could sing, and she did so with no formal training to speak of. While most singers talk of singing in the church choir, as a child Gretchen’s early experiences were mostly spent entertaining what many would consider a tougher crowd.

Long before Karaoke machines, she got up on stage every night at Big O’s with a microphone and sang along to various CDs for tips. After all, the extra $20 would really come in handy when it came time to put food on the table.

Before long, singing to CDs was a thing of the past and so was serving drinks. Gretchen found herself fronting a cover band and for the first time she felt like maybe there was a life for her outside Bond County. “Each man creates his own destiny,” she believes. “It’s up to you what you’re going to do with your life. It’s not up to anybody else.”

Gretchen’s unceremonious arrival in Nashville was in 1996; she puts it in such a matter-of-fact way: “it became apparent to me really fast that I wasn’t going to be able to make a living and pay my bills playing on Broadway.”

Somewhat discouraged after a brief encounter with a local musician, whom she happened to recognize at a Nashville music shop, she thought long and hard about how to go about realizing her dream. “I looked at him,” she recalls, “and said, ‘I’m brand new to town. What’s my first step? How do I do this?’ He pretty much laughed at me and said something that didn’t make sense. He said, ‘well, you have to create a buzz.’ I thought, ‘what the hell good does that do me?'”

It would take her four long years to figure out what he meant and, in the meantime, she did the one thing she knew how to do in order to make ends meet: she got a job slinging drinks down in Printers Alley at the Bourbon Street Blues & Boogie Bar. It may not have been the start she envisioned, but it sure beat the alternative – packing up and moving back home.

A few years later, Gretchen Wilson still had no luck at all in terms of getting a record deal. Now a mother herself with a beautiful daughter, life was about to change one Friday night when Big Kenny and John Rich walked into the bar. They were there to “have a few cocktails” and thus got to hear Gretchen Wilson belt out a couple of tunes with the house band. “John followed me up to my little cubby hole bar upstairs with his trench coat and cowboy hat and I think his exact words were, ‘Hey, how come you ain’t got a record deal yet?’ I looked at him in disgust and threw him a business card and a little homemade demo and said, ‘I’m busy. I’m working right now.'”

For months John tried getting in touch with her and for months Gretchen ignored his calls until someone finally said, “Look, you should really return his call. He might be able to help you out.” Oh, John helped her out all right. He not only introduced her to his circle of friends – “they started to use me singing on some demos” – but he also taught her how the Nashville songwriting community really works, “how they write, break for lunch and then come back and how they come up with ideas and how to contribute to a songwriting session.” Gretchen also became a member of the Muzik Mafia, a loose-knit group of singers, songwriters and musicians who get together to jam (and party) every Tuesday in a local Nashville nightspot. It was in front of her peers, very honest peers, that she honed her songwriting style.

“I had to struggle here,” she continues, “and all the people who did turn me down and the all the things that happened, it couldn’t have worked out more perfectly.” She signed with Sony Music Nashville and its newly-appointed label head, John Grady, is adamant that Gretchen be portrayed as she is. “It would be hard for me to be more excited about a new artist than I am about Gretchen Wilson,” says Grady. “The industry known as country music needs her desperately. Thank God she’s signed with us.”

She’s not Faith Hill and she’s not Shania Twain, but that’s what separates her from the others and better positions her to speak to a majority of the population that has long since been without a voice.

Hire Gretchen Wilson for your party or event!

Gretchen Wilson may be available for your next special event!

Frequently Asked Questions About How To Hire GRETCHEN WILSON for a private party or special event.

Include information about your plans for your event and how taking steps to hire GRETCHEN WILSON (or someone similar) might be of special interest.

Official booking fees for GRETCHEN WILSON, or any other celebrity, are determined based on a number of factors and may change at anytime without prior notice.