How to Hire LITTLE BIG TOWN For Your Event!

After a recording deal with the Mercury Nashville Records label, which produced no singles or albums, Little Big Town released its self-titled debut on Monument Records in 2002. It produced two minor country chart singles before the group left the label.

In 2005, the group signed to Equity Music Group, an independent record label owned by Clint Black. Their second album, The Road to Here, was released that year, and received a platinum certification from the Recording Industry Association of America (RIAA). 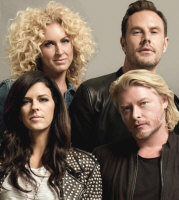 Hire Little Big Town for your festival or concert plans.

In 2001, they sang backing vocals on Collin Raye‘s album, Can’t Back Down.

On April 23, 2008, Little Big Town announced it was leaving Equity for Capitol Nashville. Shortly afterward, they charted with Sugarland and Jake Owen on a live cover of The Dream Academy’s “Life in a Northern Town”.

Hire Little Big Town:
In the fall of 2008, Little Big Town opened up for Carrie Underwood on her Carnival Ride Tour. They began their first headlining tour in January 2009 in Jacksonville, Florida and continued through April.

The band sang background vocals on Ashley Monroe‘s 2013 single, “You Got Me”, featured on her 2013 release, Like a Rose.

Little Big Town performed harmony vocals on David Nail‘s 2014 album, I’m a Fire, on the song “When They’re Gone (Lyle County)”, co-written by Brett Eldredge. They were also featured on Miranda Lambert‘s 2014 album, Platinum, on “Smokin’ and Drinkin'”, a song which the band was going to record themselves

On October 3, 2014, Reba McEntire invited the group to join the Grand Ole Opry. They accepted and were inducted by Vince Gill on October 17.

In February 2016, they appeared on “Take Me Down”, a track on Down to My Last Bad Habit, the fourteenth album by Vince Gill.

In March 2016, Little Big Town returned to the UK as part of the C2C: Country to Country tour, becoming one of four acts at the time (the others being Brantley Gilbert, Sam Hunt and Carrie Underwood) to perform at the festival twice.

Hire Little Big Town:
On October 20, 2016, The band released “Better Man”, which was written by singer-songwriter Taylor Swift, as the lead single to their upcoming seventh studio album, The Breaker.

Little Big Town albums accounted for 24 singles on Hot Country Songs and Country Airplay, including the No. 1 singles “Pontoon”, and “Better Man” along with the top 10 hits “Boondocks”, “Bring It On Home”, “Little White Church”, “Tornado”, and “Day Drinking”, and “Girl Crush”.

Hire Little Big Town for your party or event!

Little Big Town may be available for your next special event!

Frequently Asked Questions About How To Hire LITTLE BIG TOWN for a private party or special event.

Include information about your plans for your event and how taking steps to hire LITTLE BIG TOWN (or someone similar) might be of special interest.

Official booking fees for LITTLE BIG TOWN, or any other celebrity, are determined based on a number of factors and may change at anytime without prior notice.