How to Hire LADY A For Your Event! 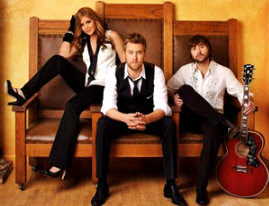 Hire Lady A for your festival or concert plans.

The band abbreviated the name to “Lady A” in June 2020 during the George Floyd protests in an attempt to blunt the name’s associations with slavery and the Antebellum South, causing a dispute with black blues and gospel singer Anita White, who had been using the name Lady A for more than 20 years.

The group made its debut in 2007 as guest vocalists on Jim Brickman‘s single “Never Alone”, before signing to Capitol Nashville. Lady A has released six albums for Capitol: Lady Antebellum, Need You Now, Own the Night, Golden, 747, Heart Break, plus one Christmas album (On This Winter’s Night), and one for BMLG Records: Ocean.

The longest-lasting number one single is “Need You Now”, which spent five weeks at that position in 2009; both that song and 2011’s “Just a Kiss” reached number one on the Adult Contemporary charts.

Lady A was awarded Top New Duo or Group by the Academy of Country Music and New Artist of the Year by the Country Music Association in 2008.

It won five awards at the 53rd Annual Grammy Awards, including Song of the Year and Record of the Year for “Need You Now”.

Haywood and Kelley co-wrote labelmate Luke Bryan‘s 2009 single “Do I”, on which the group also sings backing vocals

Hire Lady A:
The third single from the album, “Our Kind of Love“, was released on May 31, 2010, and went No. 1 in September 2010. The song was notable for being written in collaboration with a non-Nashville songwriter busbee, who at that point had previously written for Katy Perry, Timbaland and Katharine McPhee.

At the 54th Annual Grammy Awards, Lady A won the award for Best Country Album for Own the Night. By August 2013, the group had sold more than 12.5 million digital singles and 10 million albums in the United States.

On January 21, 2021, the group became members of the Grand Ole Opry after being invited by Darius Rucker.

Hire Lady A for your party or event!

Lady A may be available for your next special event!

Frequently Asked Questions About How To Hire LADY A for a private party or special event.

Include information about your plans for your event and how taking steps to hire LADY A (or someone similar) might be of special interest.

Official booking fees for LADY A, or any other celebrity, are determined based on a number of factors and may change at anytime without prior notice.

IS LADY A AVAILABLE TO WORK MY EVENT?
(i.e., what is LADY A‘s availability?)