How to Hire DIERKS BENTLEY For Your Event!

Originally from Phoenix, Arizona, Dierks Bentley moved to Nashville when he was nineteen and immediately immersed himself in the Nashville music scene.

“Most people that don’t live in Nashville probably associate the music scene here with what they hear on their radio, but there is so much more going on. There’s a lot of great live music that doesn’t get a whole lot of recognition outside of the city.” 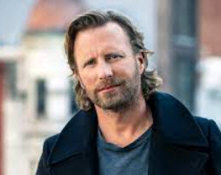 Hire Dierks Bentley for your festival or concert plans.

One place that is particularly special to Dierks is the Station Inn, a club that is in many ways a “mecca” for bluegrass fans worldwide. “I stumbled into the Station Inn one night right at the time that I was becoming pretty discouraged with the music business. I discovered a whole community of musicians and singers that played music for all the right reasons. They didn’t play because they wanted to be stars or be in music videos, they played because they loved the music. Being there made such an impression on me that I spent just about every Tuesday night there absorbing all I could take in.”

Eventually, the Nashville training ground took Dierks Bentley to a bar called Springwater, one of Nashville’s older and “cosmetically-challenged” music venues. “I remember playing there one rainy night and water was pouring onto the stage from cracks in the ceiling. We were all trying to find a place on the stage that was dry. I thought for sure I was going to be electrocuted! By the end of the night, me and my guitar were soaked. But it was my first place to have a regular gig and I didn’t care. I was just happy to be playing music in Music City.” 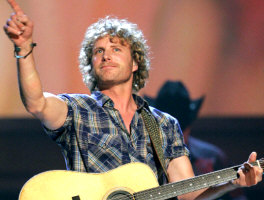 Next on the list was Market Street Brewery, a bar/restaurant located in downtown Nashville. Dierks went from playing for free draft beer to finally having a paying gig. “It took me two hours to load in, set up, and tear down this PA system that I had put together. After paying for parking, the bar tab, and the rest of the guys in the band, there usually wasn’t anything left for me.

One night Dierks was playing at Market Street when Vince Gill and Amy Grant walked through the door. Vince had his mandolin with him, and he sat down at the bar about five feet away from the stage. Dierks asked Vince if he would come up and sing a few songs and without hesitation, Vince nodded yes. “I thought he would sing a song or two and sit back down but he ended up picking with us for almost an hour and half. ‘Truly unbelievable’ is the only way I can describe it. I thought that if my music dreams never went any further, that would be alright because I got to share the stage (albeit a very small one!) with Vince Gill.” 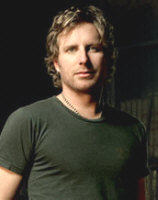 Hire Dierks Bentley to entertain your friends and colleagues.

At the same time that Dierks Bentley was playing bars on Lower Broadway, he was spending his days the same way Alan Jackson did when he first moved to town, working for TNN (The Nashville Network). “I was really lucky to have that job. I started off working in the tape library researching old music footage for a country music documentary. I couldn’t believe I was being paid to do it.” He later worked in the royalty department, sending checks to songwriters whose songs were used on the television network.

After an independent record Dierks made reached the ears of music row, he finally achieved one of his biggest goals: attaining a publishing deal. “Every morning I wake up so thankful that I’m able to be a full-time songwriter, and especially that I get to write for Sony/Tree Publishing, with all its history of great writers like Hank Cochran, Harlan Howard, and Bill Anderson.”

After years of working outside of music row, Dierks Bentley suddenly found himself surrounded by a team of people that believed in him and what he wanted to do musically. One of those people was song-plugger Arthur Buenahora, who teamed Dierks up with another Tree writer, Brett Beavers. “I knew right away that Brett and I were going to get along. The fact that he’s a musician and has been out on the road with various acts for the last twelve years, means a lot to me because they are the people I respect most in this town. He loves traditional country music and as a writer, he understands the importance of keepin’ it country and keepin’ it real, but also of trying to take the music somewhere new.”

It wasn’t long after they began collaborating that a few of their demos were heard by a couple of record labels, both expressing serious interest. After putting on a successful showcase for the two labels, what Dierks thought would be a tough decision turned out to be an easy one. “I met with Mike Dungan and everyone at Capitol Records and knew immediately that that was where I wanted to be. It really is about music over there.”

If there had been any doubts, they would have been completely erased one night when Dierks was driving by the record label late one night and saw that Mike’s lights were on in his office. Thinking Mike was burning the midnight oil, Dierks called him on the cell phone number Mike had given him. “Mike, it’s Dierks. What’s going on?” Mike replied, “I’m in Los Angeles in a limousine sitting next to James Taylor. We’re on our way to see a Paul McCartney show. What’s up?” Dierks remembers sputtering into the phone, “Dude, then what are you doing talking to me? You’re hanging out with James Taylor! I can’t believe you even took my call.” Mike laughed before answered. “Talking to you is just as important.” At that very moment, Dierks Bentley knew he’d found a home at Capitol Records.

Hire Dierks Bentley for your party or event!

Frequently Asked Questions About How To Hire DIERKS BENTLEY for a private party or special event.

Include information about your plans for your event and how taking steps to hire DIERKS BENTLEY (or someone similar) might be of special interest.

Official booking fees for DIERKS BENTLEY, or any other celebrity, are determined based on a number of factors and may change at anytime without prior notice.