How to Hire DWIGHT YOAKAM For Your Event!

He has recorded five BILLBOARD No. 1 albums, 12 gold albums, and nine platinum albums, including the triple-platinum This Time.

On rare occasions, a sense of the past is mated with a fierce, intransigent vision of the future, and something new is born. Something new like the music of Dwight Yoakam. 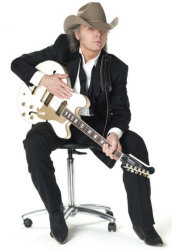 Hire Dwight Yoakam for your festival or concert plans!

Initially, the Kentucky native burst onto the scene in the early ’80s by driving an alternate route of his own invention. Hailed as a “Renaissance Man” by Time magazine, Dwight creates music that, according to the Los Angeles Times, is “rooted in the rawest of country traditions (Buck Owens, Merle Haggard, et al), but it’s aggressively contemporary without pandering to fleeting pop trends.” Vanity Fair has also noted: Yoakam strides the divide between rock’s lust and country’s lament.”

Dwight realized in the early days of his career that he might need to find an alternate highway for his music. So, he brought his music to an unlikely audience – he roots rock fans of Los Angeles, who were becoming conversant with a new breed of traditionalist through the work of such local bands as Los Lobos, the Blasters and Lone Justice, all of whom shared stages with Dwight.

It was strange chemistry, certainly, but Dwight stuck by his guns and achieved a new audience for his heady combination of gutsy country emotion and rock ‘n’ roll electricity.

That combination was also on view in his six-song 1984 debut EP “Guitars, Cadillacs, etc.” – a record that attracted the attention of devotees of rock’s most progressive sounds. “Guitars, Cadillacs,” issued independently by a small Hollywood label, was re-released in 1986, augmented by four new songs, on Reprise Records.

Listeners within the music industry took notice: “Ain’t That Lonely Yet,” the #1 top-selling single drawn from that album, won a 1993 Grammy for Best Country Vocal Performance, Male, while the album’s “Pocket Of A Clown” received a Grammy nomination in the same category a year later.

Dwight summed up his career to date with 1995’s “Dwight Live,” a smoking document of the last dates on his 1994 “This Time Tour” recorded at San Francisco’s Warfield Theater. Like all its precursors, this energetic concert recording captured his dramatic melding of country roots and contemporary fervor.

Hire Dwight Yoakam for your party or event!

Dwight Yoakam may be available for your next special event!

Frequently Asked Questions About How To Hire DWIGHT YOAKAM for a private party or special event.

Include information about your plans for your event and how taking steps to hire DWIGHT YOAKAM (or someone similar) might be of special interest.

Official booking fees for DWIGHT YOAKAM, or any other celebrity, are determined based on a number of factors and may change at anytime without prior notice.