How to Hire BRAD PAISLEY For Your Event!

Brad Paisley has scored 35 Top 10 singles on the US Billboard Country Airplay chart, 20 of which have reached number one. He set a new record in 2009 for the most consecutive singles (10) reaching the top spot on that chart. 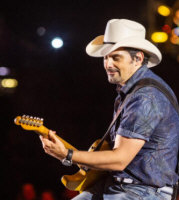 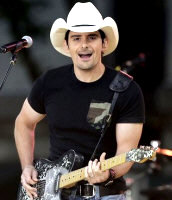 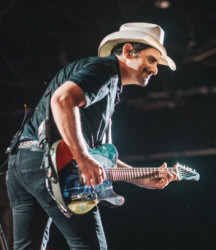 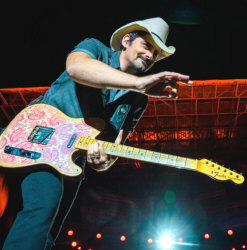 Hire Brad Paisley for your festival or concert plans.

When Brad Paisley was eight, his grandfather gave him his first guitar – a Sears Danelectro Silvertone with an amp in the case. Although fascinated by his new instrument, Paisley admits it wasn’t exactly love at first sight.

Hire Brad Paisley:
“As a little kid, you’re out playing baseball and running in the woods. There are other things that are a little more fun than holding a guitar. But a year or so into it, I found myself waking up and thinking, ‘Man, I love to do this.’ Then I really got serious about it. By the age of 10, I was playing well enough to accompany myself.”

Hire Brad Paisley:
The weekly Jamboree turned out to be Paisley’s most valuable training ground. On the weekends he didn’t perform there, he would hang out backstage. “I’d watch these artists – George Jones, Steve Wariner or whoever – and try to absorb everything from them that I could. It was an incredible learning experience.”

To give Brad Paisley a leg up in his new surroundings, the president of his local chapter of the musicians’ union wrote a letter of introduction to Nashville counterpart Harold Bradley, the famed session guitarist. Within a day of his arrival, Paisley was in Bradley’s office.

“We sat and talked guitars, and he spent an hour or so with me,” Paisley marvels. Later that day, he went to Opryland to look up a friend who was working there. By pure chance, he ran into Grand Ole Opry star Porter Wagoner, who graciously took time out from schmoozing with tourists to point Paisley toward his friend’s office.

“So, I’m thinking to myself,” Paisley says, “It’s my first day in Nashville, and I’ve just chatted with Harold Bradley and gotten directions from Porter Wagoner. I’m doing OK.”

A week after graduation, Brad Paisley signed a songwriting deal with the company. Like many up-and-coming artists in Nashville, Paisley earned extra money by singing and playing on demos. One of these attracted the attention of Arista Records/Nashville’s A&R Department; “They liked both the voice and lyrics and asked to hear more.” This budding interest from Arista dovetailed neatly with Paisley’s own ambitions.

“My goal when I moved to Nashville,” he reveals, “was to be an Arista artist. I can remember buying [Arista] albums from 1989 on – Alan Jackson, Diamond Rio, Brooks & Dunn, Pam Tillis, BlackHawk – and the music would always be great. Everything from the songs to the artwork on the albums was a notch above the rest.”

After a series of meetings and phone calls – during which each party proclaimed its affection and esteem for the other – Brad Paisley added his name to the Arista roster.

Hire Brad Paisley for your party or event!

Brad Paisley may be available for your next special event!

Frequently Asked Questions About How To Hire BRAD PAISLEY for a private party or special event.

Include information about your plans for your event and how taking steps to hire BRAD PAISLEY (or someone similar) might be of special interest.

Official booking fees for BRAD PAISLEY, or any other celebrity, are determined based on a number of factors and may change at anytime without prior notice.