How to Hire PAUL RODGERS For Your Event!

He was the lead vocalist of numerous bands, including Free, Bad Company, The Firm, and The Law. He has also performed as a solo artist and collaborated with the remaining active members of Queen under the moniker Queen + Paul Rodgers. 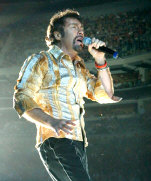 Hire Paul Rodgers for your festival or concert plans.

Rodgers has been cited as a significant influence on a number of notable rock singers. In 1991, John Mellencamp called Rodgers “the best rock singer ever”. Freddie Mercury in particular liked Rodgers and his aggressive style.

When his friend, Jimmy Page, started to come around to his house, guitar in hand and Led Zeppelin at an end, the duo’s first live pairing was on the US ARMS (Action Research into Multiple Sclerosis) Tour, which had first been mooted by Eric Clapton and, besides Rodgers and Page, would include Jeff Beck, Joe Cocker, Steve Winwood and others.

After his appearance on TV’s Late Show with David Letterman in New York, he met and jammed with B.B. King. That same year, Rodgers, Jimmie Vaughan, Levon Helm, bluesmen Hubert Sumlin, Johnnie Johnson, James Cotton and others performed a sold-out concert in Cleveland as a Muddy Water Blues: A Tribute to Muddy Waters.

In 2014, again performed with the Trans-Siberian Orchestra on their New Year’s Eve show in Seattle, Washington. Rodgers performed Can’t Get Enough and All Right Now.

In the summer of 2018, Rodgers toured with Jeff Beck.

Hire Paul Rodgers for your party or event!

Paul Rodgers may be available for your next special event!

Frequently Asked Questions About How To Hire PAUL RODGERS for a private party or special event.

Include information about your plans for your event and how taking steps to hire PAUL RODGERS (or someone similar) might be of special interest.

Official booking fees for PAUL RODGERS, or any other celebrity, are determined based on a number of factors and may change at anytime without prior notice.