How to Hire BILLY GIBBONS For Your Event!

He began his career in the Moving Sidewalks, who recorded Flash (1968) and opened four dates for the Jimi Hendrix Experience. Gibbons formed ZZ Top in late 1969 and released ZZ Top‘s First Album in early 1971. He has also maintained a solo career in recent years, starting with his first album Perfectamundo (2015). 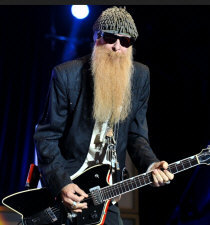 Hire Billy Gibbons for your festival or concert plans.

Billy Gibbons possesses a gravelly bass-baritone singing voice and is known for his bluesy, groove-based guitar style. Gibbons is also recognized for the chest-length beard he has worn since 1979, a look he shared with ZZ Top bassist Dusty Hill until Hill’s death in 2021.

Gibbons has made appearances with other artists and acted on television shows, most notably Bones. In 2001, Rolling Stone named him the 32nd greatest guitarist of all time.

In 2007, Gibbons was featured in the documentary feature film The 1959 Burst alongside Les Paul guitar legends like Slash, Rick Nielsen and Eric Johnson.

Gibbons performed with Hank Williams III on the song “Trashville” from his album Lovesick, Broke and Driftin’.

Billy Gibbons was a guest vocalist on Kid Rock‘s “Hillbilly Stomp” from the album, Kid Rock.

In 2008, Gibbons sang background vocals on Sammy Hagar‘s CD, Cosmic Universal Fashion, during the song “Switch on the Light”.

In 2009, Gibbons played guitar on “Broke Down on the Brazos”, the opening track of Gov’t Mule‘s album, By a Thread. Also, in 2009, he joined Jeff Beck onstage at the 25th Anniversary Rock & Roll Hall of Fame Concert with a version of Jimi Hendrix’s “Foxy Lady”.

On January 22, 2010, Gibbons joined Ben Harper, Jeff Beck, Conan O’Brien and others on the final episode of The Tonight Show with Conan O’Brien playing a Will Ferrell-led rendition of Lynyrd Skynyrd‘s “Free Bird”.

On December 15, 2012, Billy Gibbons made a guest appearance at Social Distortion‘s concert at the House of Blues on the Sunset Strip.

Hire Billy Gibbons for your party or event!

Billy Gibbons may be available for your next special event!

Frequently Asked Questions About How To Hire BILLY GIBBONS for a private party or special event.

Include information about your plans for your event and how taking steps to hire BILLY GIBBONS (or someone similar) might be of special interest.

Official booking fees for BILLY GIBBONS, or any other celebrity, are determined based on a number of factors and may change at anytime without prior notice.