How to Hire ZZ TOP For Your Event!

This initial trio completed ZZ Top‘s debut single, “Salt Lick,” before Greig was fired. He was replaced by Bill Ethridge. Mitchell was then replaced by Frank Beard, while Dusty Hill subsequently joined in place of Ethridge. 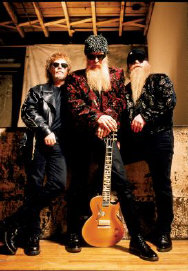 Hire ZZ Top for your festival or concert plans!

Initially ZZ Top joined a growing swell of southern boogie bands and started a constant round of touring, building up a strong following. Their debut album, while betraying a healthy interest in blues, was firmly within this genre, but “Rio Grande Mud” indicated a greater flexibility. It included the rousing “Francine” which, although indebted to The Rolling Stones, gave the trio their first hit and introduced them to a much wider audience.

Their third album, “Tres Hombres,” was a powerful, exciting set that drew from delta music and high energy rock. It featured the band’s first national hit with “La Grange” and was their first platinum album. The group’s natural ease was highly affecting and Gibbons’ startling guitar work was rarely bettered during these times. 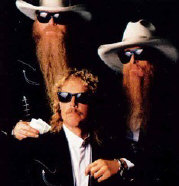 In 1974, the band’s first annual “Texas-Size Rompin’ Stompin’ Barndance And Bar-B-Q” was held at the Memorial Stadium at the University Of Texas. 85,000 people attended: the crowds were so large that the University declined to hold any more rock concerts, and it was another 20 years before they resumed.

However, successive album releases failed to attain the same high standard and ZZ Top took an extended vacation following their expansive 1976-1977 tour. After non-stop touring for a number of years the band needed a rest. Other reasons, however, were not solely artistic, as the group now wished to secure a more beneficial recording contract. 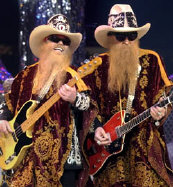 They resumed their career in 1979 with the superb “Deguello,” by which time both Gibbons and Hill had grown lengthy beards (without each other knowing!). Revitalized by their break, the trio offered a series of pulsating original songs on “Deguello” as well as inspired recreations of Sam And Dave’s “I Thank You” and Elmore James’ “Dust My Broom.”

The transitional “El Loco” followed in 1981 and although it lacked the punch of its predecessor, preferring the surreal to the celebratory, the set introduced the growing love of technology that marked the group’s subsequent releases.

The group skillfully wedded computer-age technology to their barrelhouse R&B to create a truly memorable set that established them as one of the world’s leading live attractions.

The follow-up, “Afterburner,” was another strong album, although it could not match the sales of the former. It did feature some excellent individual moments in “Sleeping Bag” and “Rough Boy,” and the cleverly titled “Velcro Fly.” ZZ Top undertook another lengthy break before returning with the impressive “Recycler.”

Other notable appearances in 1990 included a cameo, playing themselves, in “Back To The Future 3.” In 1991, a greatest hits compilation was issued, and a new recording contract was signed the following year, with BMG Records.

“Antenna” was the first album with the new company. Over the years, one of their greatest strengths has been their consistently high-standard live presentation and performance on numerous record-breaking (financially) tours in the USA.

One of rock’s maverick attractions, Gibbons and Beard have retained their eccentric, colorful image, dark glasses and Stetson hats, complete with an almost casual musical dexterity that has won over hardened cynics and carping critics. In addition to having produced a fine (but sparse) canon of work they will also stay in the record books as having the longest beards in musical history (although inappropriately named, Frank Beard, is clean-shaven).

Hire ZZ Top for your party or event!

ZZ Top may be available for your next special event!

Frequently Asked Questions About How To Hire ZZ TOP for a private party or special event.

Include information about your plans for your event and how taking steps to hire ZZ TOP (or someone similar) might be of special interest.

Official booking fees for ZZ TOP, or any other celebrity, are determined based on a number of factors and may change at anytime without prior notice.

IS ZZ TOP AVAILABLE TO WORK MY EVENT?
(i.e., what is ZZ TOP‘s availability?)