How to Hire ROBBIE WILLIAMS For Your Event!

Former Member of: Take That

Hire Robbie Williams:
Robert Peter Williams (born 13 February 1974) is an English singer and songwriter. He found fame as a member of the pop group Take That from 1990 to 1995 and achieved commercial success after launching a solo career in 1996.

Six of his albums are among the top 100 biggest-selling albums in the UK, with two of them in the top 60, and he gained a Guinness World Record in 2006 for selling 1.6 million tickets in a single day during his Close Encounters Tour. 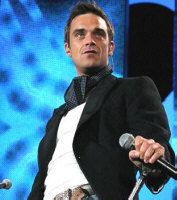 In 2004, he was inducted into the UK Music Hall of Fame after being voted the Greatest Artist of the 1990s. According to the British Phonographic Industry (BPI), he has been certified for 20.2 million albums and 8.66 million singles in the UK as a solo artist.

Five of his albums have also topped the Australian albums chart, and has sold 75 million records worldwide, making him one of the best-selling music artists of all time.

Robbie Williams was the opening act at the Diamond Jubilee Concert, which was co-organised by Gary Barlow, held outside Buckingham Palace on 4 June 2012.

In September 2013, Robbie Williams announced a follow up to his 2001 swing album, titled Swings Both Ways for release in November. The album features covers and original songs, whilst also including duet recordings with Michael Bublé, Olly Murs, Rufus Wainwright, Lily Allen and Kelly Clarkson.

On 17 July 2018, Williams along with his wife, and One Direction star Louis Tomlinson, were announced as the new judges on the fifteenth series of The X Factor in the UK, joining Simon Cowell and replacing Louis Walsh, Sharon Osbourne and Nicole Scherzinger.

As a singer, his influences include Tom Jones, Freddie Mercury, Elvis Presley and Bono.

Hire Robbie Williams for your party or event!

Robbie Williams may be available for your next special event!

Frequently Asked Questions About How To Hire ROBBIE WILLIAMS for a private party or special event.

Include information about your plans for your event and how taking steps to hire ROBBIE WILLIAMS (or someone similar) might be of special interest.

Official booking fees for ROBBIE WILLIAMS, or any other celebrity, are determined based on a number of factors and may change at anytime without prior notice.