How to Hire SANTANA For Your Event!

Hire Santana:
GRAMMY AWARD and LATIN GRAMMY AWARD winning Carlos Santana is an American guitarist who rose to fame in the late 1960s and early 1970s with his band Santana, which pioneered a fusion of rock ‘n’ roll and Latin American jazz. 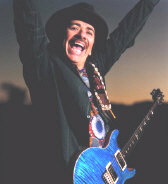 Hire Santana for your festival or concert plans!

Its sound featured his melodic, blues-based lines set against Latin American and African rhythms played on percussion instruments not generally heard in rock, such as timbales and congas. He experienced a resurgence of popularity and critical acclaim in the late 1990s.

In 2015, ROLLING STONE magazine listed him at No. 20 on their list of the 100 greatest guitarists. He has won 10 Grammy Awards and three Latin Grammy Awards and was inducted along with his namesake band into the Rock and Roll Hall of Fame in 1998.

The origins of SANTANA lie in a chance meeting in San Francisco between Carlos Santana and keyboardist Gregg Rolie in 1966. Towards the end of that year the two musicians formed the Santana Blues Band together with Tim Frazer on guitar, Gus Rodrigues on bass, Rod Harper on drums and Michael Carabello on congas. Carabello provided the third element in what was, in barely three years, to become the band, Santana.

Hire Santana to entertain your friends and colleagues!

However, the personnel began to change quickly as the band was developing. By the middle of 1967 the group version was back to the nucleus of Carlos Santana and Gregg Rolie with both Bob Livingstone on drums, Marcus Malone on percussion and David Brown on bass — the latter of whom was to become the fourth element in SANTANA.

During 1968 the band was spotted by Bill Graham who was promoting the Fillmore West where the band initially played as the opening act. Such was the reaction that their reputation began to grow apace with Bill Graham eventually becoming their co-manager.

In parallel with the success of the band came the recognition of Carlos Santana as a virtuoso guitarist, the result of which was an invitation for him to play on the first super session album released as “The Live Adventures of Mike Bloomfield and Al Kooper.”

As 1969 progressed the Santana Blues Band developed into a mark three version with Carlos Santana and Gregg Rolie augmented by Michael Shrieve on drums, the returning Michael Carabello on congas, Chepito Areas as trombalist-percussionist, Alberto Gianquinto on guitar and Rico Reyes on vocals.

Both Alberto Guianquinto and Rico Reyes were to feature later in the SANTANA story, with the former being credited with the arrangements on the first album “Santana” and as the pianist on “Incident At Neshabur,” which was included on their second recording, which was the acclaimed “Abraxas” album.

1969 was, of course, the year of the breakthrough by SANTANA following their appearance at the Woodstock Festival in New York State, where they received a standing ovation for “Soul Sacrifice” and which became the earliest composition to closely identified with the band.

History does not relate exactly when the SANTANA BLUES BAND became SANTANA. Highly relevant to this is the fact that the band was to make the first studio recording of “Soul Sacrifice” along with eleven other compositions, following their appearance at Woodstock. The band went into Pacific Recording Studios in San Mateo, California and laid down a piece of recording history as well as providing the impetus for an extraordinary recording career.

For these studio recordings the band was Carlos Santana on guitar, Gregg Rolie on keyboards and vocals, Michael Shrieve on drums, Chepito Areas on percussion, Michael Carabello on congas and David Brown on bass and can justifiably be called the first line-up of SANTANA.

These recordings, which also included the original versions of “Persuasion” and “Jingo” and could easily be judged to be finished masters, became the auditions tapes from which CBS was to sign the band and launch them on their way to international success. At this point we might say the rest is history.

Also, available from this seminal time are four fascinating tracks recorded at an audition that resulted in Neil Schon joining the band on guitar, a position that he held until 1972 when he and Rolie formed Journey.

The session involved Gregg Rolie on keyboards and vocals, David Brown on bass and Michael Shrieve on drums and perhaps most vividly illustrates the move from the blues band period to the highly distinctive Latin sound of SANTANA. While two of the tracks consist of little more than a jam session as the musicians got to know each other, both “Travellin’ Blues” and “With A Little Help From My Friends” hark back to the roots of the SANTANA BLUES BAND. This double compact disc places all of the original SANTANA recordings into context for the first time.

Hire SANTANA for your party or event!

SANTANA may be available for your next special event!

Frequently Asked Questions About How To Hire SANTANA for a private party or special event.

HOW TO BOOK SANTANA?
(i.e., how to hire SANTANA for an event)

Include information about your plans for your event and how taking steps to hire SANTANA (or someone similar) might be of special interest.

Official booking fees for SANTANA, or any other celebrity, are determined based on a number of factors and may change at anytime without prior notice.

IS SANTANA AVAILABLE TO WORK MY EVENT?
(i.e., what is SANTANA‘s availability?)