How to Hire JOURNEY For Your Event!

Hire Journey:
Journey is an American rock band formed in San Francisco in 1973 by former members of Santana, Steve Miller Band, and Frumious Bandersnatch. Guitarist Neal Schon is their only constant member.

Journey was inducted into the Rock and Roll Hall of Fame with the class of 2017.

Founded in 1973 in San Francisco around former Santana members Neal Schon and Gregg Rolie, with the assistance of Ross Valory, George Tickner and Prairie Prince, the legacy of Journey has spanned nearly 30 years with 18 U.S. releases and 50,000,000 in album sales. Their music is artful, intense, melodic rock played with passion and superb musicianship. 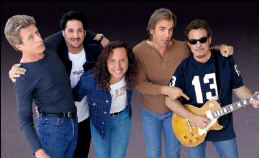 Hire Journey for your festival or concert plans.

The switch to their signature highly sophisticated rock occurred with the recording of their hugely successful album, “Infinity.”

“Captured” was a live double album that surprised many critics. The album featured cranked-up guitars and raucous hard rock, eventually peaking at #9 on the US album chart. Founding member Gregg Rolie departed after its release, to be replaced by Jonathan Cain, who had previously played with the Babys.

Cain’s arrival was an important landmark in Journey‘s career, as his songwriting input added a new dimension to the band’s sound. The band’s next release, “Escape,” reached #1 and stayed in the charts for more than a year. It also spawned three US Top 10 hit singles, “Who’s Crying Now,” “Don’t Stop Believin'” and “Open Arms.” The follow-up, “Frontiers,” was also massively successful, staying at #2 on the Billboard album chart for nine weeks. 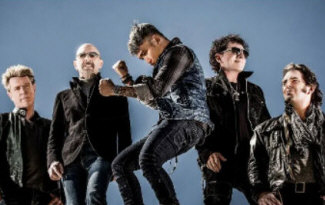 Valory and Smith departed the group prior to the release of 1986’s “Raised On Radio,” which generated another US hit single, “Be Good To Yourself.” The band was joined in the studio and subsequent live dates by bass players Randy Jackson and Bob Glaub, drummers, Mike Baird and Nashville veteran Larrie Londin.

Hire Journey:
Vocalist Steve Augeri first recorded with Journey for the band’s 1998 contribution to the “Armageddon” soundtrack – “Remember Me.” The soundtrack, which hit #1 on the Billboard charts, was certified triple platinum.

The Egyptians regarded the divine scarab beetle as a symbol of self-creative power, rebirth, renewal, transformation and regeneration. The scarab, which has also become the long-time symbol for the legendary rock band Journey, has evolved into an exceptionally fitting symbol for a band that began in 1973 as an experimental rhythm section (formed around guitar prodigy Neal Schon) and eventually sold more than 50 million records and became one of the biggest rock bands in the world.

For Journey, transformation and renewal are an integral part of the creative force that has led the band on their remarkable “journey.” Journey‘s touring and performing continues to delight audiences across the country and around the globe.

Hire Journey for your party or event!

Frequently Asked Questions About How To Hire JOURNEY for a private party or special event.

HOW TO BOOK JOURNEY?
(i.e., how to hire JOURNEY for an event)

Include information about your plans for your event and how taking steps to hire JOURNEY (or someone similar) might be of special interest.

Official booking fees for JOURNEY, or any other celebrity, are determined based on a number of factors and may change at anytime without prior notice.

IS JOURNEY AVAILABLE TO WORK MY EVENT?
(i.e., what is JOURNEY‘s availability?)