How to Hire PAUL ANKA For Your Event!

Beginning his career by entering amateur contests and sneaking into clubs, Paul Anka went on to become one of the greatest songwriters in history. He has achieved unprecedented success in every venue: stage, screen, television and recording. His musical compositions are internationally known and have been recorded by the greatest names in the entertainment industry.

Hire Paul Anka for your festival or concert plans.

He is best known for his signature hit songs including “Diana”, “Lonely Boy”, “Put Your Head on My Shoulder”, and “(You’re) Having My Baby”.

Anka also wrote the theme for The Tonight Show Starring Johnny Carson; one of Tom Jones’ biggest hits, “She’s a Lady”; and the English lyrics to Claude François and Jacques Revaux’s music for Frank Sinatra’s signature song “My Way”, which has been recorded by many, including Elvis Presley. 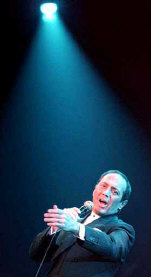 He received the honor of being named one of Billboard Magazine’s most successful artists in history, putting him alongside music greats Elvis Presley and the Beatles.

With more than 900 songs to his credit, Anka’s songs have been performed well over 90 million times (BMI statistic) worldwide. His LP and single sales collectively number more than 42 million (BMI statistic).

Paul Anka‘s contributions to the entertainment industry have earned him numerous awards and special recognition. In addition to performing for heads of state, he has been honored by the French government, who awarded him the title: Chevalier In The Order of Arts and Letters. He is among only a handful of Americans to receive this prestigious award. The National Academy of Popular Music elected Anka into The Songwriters Hall Of Fame.

An indication of his versatility shows in his most beloved song “My Way.” It has been recorded not only by the likes of Elvis Presley, but also, Sid Vicious, and most notably Frank Sinatra.

The list of performers recording Anka’s songs is an honor role of some of the most talented artists of all time: Sinatra, Presley, Barbra Streisand, Buddy Holly, Tom Jones, and the Doobie Brothers. Paul Anka has successfully collaborated with songwriters Davis Foster, Carol Bayer Sage, Richard Marx, Michael McDonald, Michael Jackson and many others.

Paul Anka’s contribution to television is the most recognized theme song in history. When Johnny Carson made his debut as host of “The Tonight Show” in 1962, the Anka-written theme was there, too. Since the debut, the theme song has been performed more than 1,400,000 times.

Many memorable film and television programs bear the hallmark of Anka’s unmistakable musical signature. In addition to writing the theme music for “The Longest Day,” Anka penned the theme music and the title song for Louis Malle’s “Atlantic City” took top honors at the Venice Film Festival.

In 1972, a street in Ottawa was named Paul Anka Drive. In 1981, the Ottawa City Council named August 26 as “Paul Anka Day” to celebrate his quarter-century in show business.

Paul Anka won the Juno Award for Composer of the Year (an award given for songwriting) in 1975. He has been nominated for Juno Awards many other times. He was inducted into the Canadian Music Hall of Fame in 1980.

On September 6, 1990, he became a naturalized citizen of the United States.

Anka was made an Officer of the Order of Canada in October 2004.

Paul Anka was inducted into Canada’s Walk of Fame in 2005.

Hire Paul Anka for your party or event!

Paul Anka may be available for your next special event!

Frequently Asked Questions About How To Hire PAUL ANKA for a private party or special event.

HOW TO BOOK PAUL ANKA?
(i.e., how to hire PAUL ANKA for an event)

Include information about your plans for your event and how taking steps to hire PAUL ANKA (or someone similar) might be of special interest.

Official booking fees for PAUL ANKA, or any other celebrity, are determined based on a number of factors and may change at anytime without prior notice.

IS PAUL ANKA AVAILABLE TO WORK MY EVENT?
(i.e., what is PAUL ANKA‘s availability?)