How to Hire The DOOBIE BROTHERS For Your Event!

Known for their flexibility in performing across numerous genres and their vocal harmonies, they have been active for five decades with their greatest success in the 1970s.

Modeled roughly on the three-guitar, three-part vocal harmony sound of the seminal San Francisco band Moby Grape, The Doobie Brothers were founded in San Jose, California in 1970. The blending of the folk-style finger-picking of Pat Simmons with the rough-hewn rock licks of Tommy Johnston, whose soulful lead vocals gave the band its initial distinctive sound, helped to define what would become known as the California sound of the ’70s.

The band’s self-titled 1971 debut album, “The Doobie Brothers,” yielded no hit singles, but the subsequent “Toulouse Street” of 1972 burst out with Johnston’s “Listen To The Music” (#11) and “Jesus Is Just Alright” (#35) in the last three months of the year.

The third album, “The Captain and Me” (1973) established the Doobies as concert headliners on the strength of the hits “Long Train Runnin'” (#8) and “China Grove” (#15) (both penned by Johnston).

The fourth album, “What Were Once Vices Are Now Habits” (1974), included “Black Water,” the band’s first #1 record which eventually sold more than 2 million copies, and was the first hit to feature Simmons as lead vocalist (he also wrote the song).

By 1975, with the release of “Stampede,” which included the remake of the Motown classic “Take Me In Your Arms (Rock Me A Little While)” (#11) and the addition of former Steely Dan guitarist Jeff “Skunk” Baxter, The Doobies had become one of the most popular rock bands in the country. 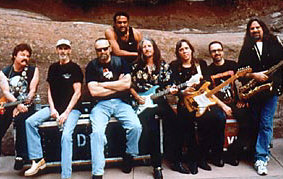 Hire the Doobie Brothers to entertain a company’s special event!

When illness forced Johnston out of The Doobies lineup, Baxter suggested another Steely Dan alumnus to fill his spot, and Michael McDonald was drafted. His presence was felt immediately as The Doobie Brothers scored a platinum million-selling album in 1976 with “Takin’ It To The Streets,” propelled by the title-tune single “Takin’ It To The Streets” (#13) written by McDonald.

In the summer of the year, the band backed up Carly Simon on her version of the McDonald composition, “It Keeps You Runnin’,” which hit #46 on the chart; ironically, the Doobies’ own version of the song released five months later did even better for them, hitting #37. 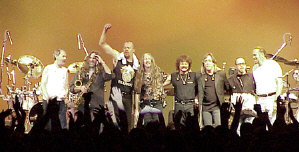 1979 also found Baxter leaving The Doobies, to be replaced by steel guitarist John McFee, a veteran of Clover, the Marin County country-rockers who not only backed up Elvis Costello on his debut album (before the Attractions were formed), but also nurtured the early career of singer-songwriter Huey Lewis.

What others say —
Richard, you have been wonderful beyond words…we are all sending our heartfelt appreciation for all you did to bring us a wonderful concert last night.

The Doobie Brothers proved to be the exact opposite of what we have come to expect from big rock shows…I am deeply appreciative and grateful for the way John and Gary handled things yesterday – working with us NOT ONLY to get the band to the Meet and Greet after the show, but even to the prow of the Lady of the Lake for a photo op!!!! What great guys…thanks so very, very much.

Please extend our deepest thanks and appreciation to the band…what a show they gave us (even playing longer than the contract specified) with such energy…I think they sound better than ever!

They were wonderful backstage, as well…good natured about making our stage work for them…working with our staff…after so many years on the road they might have been difficult, disinterested, cynical, etc., etc.  There was none of that…

I sang for many years at the Metropolitan Opera in NYC before returning home and taking on the building of Music by the Lake.  I’ve seen many divas (and divos) over the years…I was expecting that from The Doobies but was wonderfully surprised to find just the opposite. Please tell them how impressed I was over this…but it really comes from the top down…mille grazie!

We hope to see and work with you again!
— Christine E. Flasch, Executive Director, Music By The Lake

Hire The Doobie Brothers for your party or event!

The Doobie Brothers may be available for your next special event!

Frequently Asked Questions About How To Hire THE DOOBIE BROTHERS for a private party or special event.

Include information about your plans for your event and how taking steps to hire THE DOOBIE BROTHERS (or someone similar) might be of special interest.

Official booking fees for THE DOOBIE BROTHERS, or any other celebrity, are determined based on a number of factors and may change at anytime without prior notice.