How to Hire TAMIA (ta-MEE-ah) For Your Event!

Hire Tamia:
Tamia Marilyn Washington Hill (born May 9, 1975) is a Canadian singer, songwriter, and producer. Tamia was born and raised in Windsor, Ontario.

Her self-titled debut album was released in 1998 and followed by a series of successful albums with Elektra Records, including A Nu Day (2000) and More (2004). Several songs from these albums became hit singles on the pop and R&B record charts, including “So Into You”, “Stranger in My House” and “Imagination”, as well as her collaborations “Into You”, “Missing You” and “Spend My Life with You”.

Hire Tamia for your festival or concert plans!

Tamia was diagnosed with multiple sclerosis in 2003. However, the illness has since been in remission though she has occasional but controllable symptoms. She is an advocate for the National Multiple Sclerosis Society (NMSS) on behalf of others affected by the disease.

Tamia along with Babyface, Portrait, and Barry White received a second nomination for “Slow Jams”, the second single from a Quincy Jones’ album, which fared well on the charts, peaking at number two on the New Zealand Singles Chart, and received a third nod in the Best Pop Collaboration with Vocals category for her performance on “Missing You”, a collaboration with singers Brandy, Gladys Knight, and Chaka Khan for the soundtrack of the 1996 motion picture, Set It Off. A top thirty success on the US Billboard Hot 100, it was certified gold by the Recording Industry Association of America (RIAA). 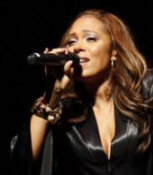 Quincy Jones enlisted the services of several producers to work on Tamia‘s debut self-titled album, including Jermaine Dupri, Tim & Bob, and Mario Winans, many of which would become frequent producers on subsequent projects.

Released in April 2004, More was released to generally mixed reception from music critics and debuted and peaked at number 17 on the US Billboard 200 and number four on the Top R&B/Hip-Hop Albums, with first week sales of 71,000 copies, marking the highest-selling and highest-charting opening of Tamia‘s catalogue yet.

In support of More, Tamia was featured as a special guest on the Verizon Ladies First Tour, co-headlined by Beyoncé, Alicia Keys and Missy Elliott, which became one of the biggest concert tours of the year. In 2005, More became Tamia‘s third consecutive album to earn a Juno Award nomination in the R&B/Soul Recording of the Year category.

Her discography includes nine albums (including seven studio albums, one extended play, and one compilation albums), and twenty-six singles (including four as a featured artist and one charity singles).

Hire Tamia for your party or event!

Tamia may be available for your next special event!

Frequently Asked Questions About How To Hire TAMIA for a private party or special event.

HOW TO BOOK TAMIA?
(i.e., how to hire TAMIA for an event)

Include information about your plans for your event and how taking steps to hire TAMIA (or someone similar) might be of special interest.

Official booking fees for TAMIA, or any other celebrity, are determined based on a number of factors and may change at anytime without prior notice.

IS TAMIA AVAILABLE TO WORK MY EVENT?
(i.e., what is TAMIA‘s availability?)