How to Hire STYX For Your Event!

The band established itself with a progressive rock sound in the 1970s and began to incorporate pop rock and soft rock elements in the 1980s. 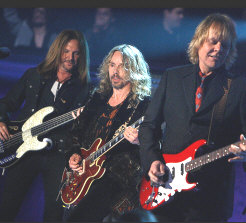 Hire Styx for your festival or concert plans!

In 1980, Styx was voted the most popular band in America, according to a Gallup poll.

Styx‘s commercial breakthrough in North America came with The Grand Illusion (1977), which peaked at No. 6 in both the US and Canada and became the first of four straight multi-platinum albums in the US for Styx. It featured the single “Come Sail Away”, a top 10 hit in both countries.

Styx had eight songs that hit the top 10 on the US Billboard Hot 100, as well as 16 top 40 singles. Seven of their eight top 10 singles were written and sung by founding member and lead singer Dennis DeYoung, who has not been part of the band since 1999.

In 2003, Styx performed at the Super Bowl XXXVII pre-game show at Qualcomm Stadium.

In 2004, Styx is invited to perform at Eric Clapton‘s Crossroads Guitar Festival in Dallas in June. Since they had just played there three weeks previously, they decide to perform their version of the Beatles classic “I Am the Walrus,” which keyboardist Lawrence Gowan had only performed in sound checks.

In a North American tour beginning in May 2010, Styx was a co-headliner of United in Rock with Foreigner and special guests Kansas.

On November 22, 2013, they announced a benefit concert with REO Speedwagon titled “Rock to the Rescue” to raise money for the affected families of the tornado in central Illinois.

The summer of 2014 found the band back on the road in a new touring package called Soundtrack of Summer, with Foreigner and ex-Eagle Don Felder.

Styx’s 2015 summer tour saw them re-uniting with Def Leppard. Along with Tesla, the groups played outdoor venues across the United States.

On June 5, 2022, Styx was inducted into the Illinois Rock & Roll Museum Hall of Fame. That same night Dennis DeYoung was additionally inducted as a songwriter.

Hire Styx for your party or event!

Styx may be available for your next special event!

Frequently Asked Questions About How To Hire STYX for a private party or special event.

Include information about your plans for your event and how taking steps to hire STYX (or someone similar) might be of special interest.

Official booking fees for STYX, or any other celebrity, are determined based on a number of factors and may change at anytime without prior notice.

IS STYX AVAILABLE TO WORK MY EVENT?
(i.e., what is STYX‘s availability?)