How to Hire KENNY LOGGINS For Your Event!

Former member of: Loggins and Messina

Hire Kenny Loggins:
GRAMMY AWARD winning Kenny Loggins was born in Everett, Washington. The youngest of three boys, he was born seven years to the day after his oldest brother, Robert. His father, a traveling salesman, moved the family from Washington to Detroit and back again, before settling in Alhambra, California, a suburb of Los Angeles.

Kenny went to Catholic school where he kept a low profile. A shy boy, he sought acceptance through music and sports. His middle brother, Dan, taught him to sing harmonies. Kenny later learned to play guitar. With the encouragement of his high-school principal, he performed in class plays and organized talent shows. 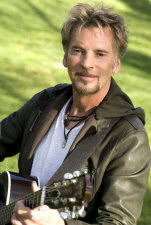 Hire Kenny Loggins for your festival or concert plans!

Kenny’s career began with his first significant break as a staff writer with a music publisher for $100 a week. In 1970, Kenny met Jim Messina, who was impressed with several tunes Kenny wrote for the Nitty Gritty Dirt Band. Although Messina initially intended to produce Kenny as a solo artist, the two formed their own band.

Through most of the 70s, Loggins and Messina amassed two platinum and five gold albums, worldwide super stardom, and a distinguished list of classic hits such as “Danny’s Song,” “Love Song,” “Your Mama Don’t Dance,” “Vahevela” and many more. The pair parted ways in 1976 and it wasn’t long before Kenny’s star as a solo artist began to rise.

Hire Kenny Loggins to entertain at your company’s special event!

Kenny Loggins’ first three solo albums, “Celebrate Me Home,” “Nightwatch” and “Keep The Fire” all went platinum. In 1980, “What A Fool Believes,” which he co-authored with Michael McDonald, garnered a Grammy for Song of the Year. The following year “This is It” took the Grammy for Best Pop Vocal. In his 1981 double album “Alive,” Kenny gave fans their first taste of his sensational stage show.

In 1984, Kenny Loggins won Japan’s International Artists Award and in 1985 his self-produced album “Vox Humana” was certified gold. In that same year “Footloose” was nominated for an Academy Award. His 1991 album, “Leap of Faith,” spawned four Top 5 Adult Contemporary singles.

In 1993, Kenny released his first live album in twelve years, “Outside From the Redwoods.” A video of the concert aired on PBS. His special, “This Island Earth” was broadcast on the Disney Channel in 1992 and was nominated for three Emmys. It won in the categories of Outstanding Achievement in Writing (Special Class) and Outstanding Original Song for “This Island Earth.”

Interior Secretary Bruce Babbitt used Kenny’s “Conviction Of The Heart” in a live broadcast to Latin American on the global environmental crises. Vice President Al Gore declared the song as the unofficial anthem of the environmental movement.

In April 1993, Kenny Loggins joined Paul McCartney, kd lang and others in a star-studded Earth Day concert at the Hollywood Bowl in Los Angeles. He performed “Conviction Of The Heart” with a 25-voice choir and a six-piece percussion ensemble.

As the father of four children, Kenny saw the need for a record that didn’t “sing down” to children, one that both parents and children could enjoy together. He realized that he might be the one to make such a record when he noticed that “Leap of Faith” was capturing the attention of young children as well as adults.

“Return To Pooh Corner” was certified gold in 1994 and nominated for a 1995 Grammy in the Best Children’s Album category. It was named one of the best children’s albums at the National Association of Parenting Publications annual music awards.

In 1997, Kenny Loggins recorded the Academy Award nominated “For The First Time,” which was featured in the film, “One Fine Day.” His album, “Unimaginable Life,” released in July 1997, shares its title with the book he wrote with his wife Julia. In the book they illustrate their personal love story with selections from more than 70 personal journals.

Hire Kenny Loggins for your party or event!

Frequently Asked Questions About How To Hire KENNY LOGGINS for a private party or special event.

Include information about your plans for your event and how taking steps to hire KENNY LOGGINS (or someone similar) might be of special interest.

Official booking fees for KENNY LOGGINS, or any other celebrity, are determined based on a number of factors and may change at anytime without prior notice.