How to Hire MELISSA ETHERIDGE For Your Event!

Hire Melissa Etheridge:
GRAMMY AWARD winning Melissa Lou Etheridge (born May 29, 1961) is an American singer, songwriter, musician, and guitarist. Her eponymous debut album was released in 1988 and became an underground success. It peaked at No. 22 on the Billboard 200 and its lead single, “Bring Me Some Water”, garnered Etheridge her first Grammy Award nomination for Best Rock Vocal Performance, Female in 1989. 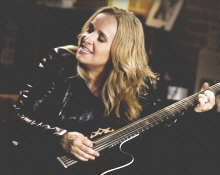 Hire Melissa Etheridge for your festival or concert plans!

The success of Melissa Etheridge is spurred largely by the passion and raw emotion of her live performances. Tirelessly touring the world over (by the end of 1996, she played more than 130 shows in Europe, Canada, New Zealand, Australia and the United States), Melissa continues to capture larger audiences with the honesty and directness of her music. “I think that people like me best when I just peel back the layers and speak about what’s there.”

Since moving to Los Angeles in the mid 80s, where Melissa was seen and subsequently signed by Chris Blackwell of Island Records, her talents have indeed been no secret.

In 1990, Melissa Etheridge was given a Juno award, the Canadian equivalent of a Grammy, for International Entertainer of the Year. Still, it was her fourth album – 1993’s quintuple platinum, “Yes I Am,” that cemented both Etheridge’s celebrity and her status as one of America’s premier performers.

It boasted Top 10 hits; “I’m The Only One,” “Come To My Window” and “If I Wanted To,” which between them earned two Grammy nominations as well as earned her the prestigious Songwriter of the Year Award from ASCAP. “Come To My Window” joined “Ain’t It Heavy” as Melissa’s second Grammy Award for the Best Female Rock Performance category.

Melissa Etheridge‘s numerous television appearances have included an “MTV Unplugged” where Bruce Springsteen joined her in a duet, and the premiere episode of VH1’s “Duets,” during which she performed with Joan Osborne, Paul Cole, Sophie B. Hawkins and Jewel. In the film world, Melissa contributed a song to the hit soundtrack for the Whoopi Goldberg movie, “Boys on the Side.”

The Melissa Etheridge World Tour, in support of “Your Little Secret,” offered people a chance to share in what millions of us already know – that few musicians are able to share their artistry, talent and raw energy in the way Melissa does.

The L.A.-based singer/songwriter has sold more than 25 million albums worldwide and is best known for international radio hits like “Bring Me Some Water,” “I’m The Only One,” “I Want to Come Over” and “Come To My Window.”

Hire Melissa Etheridge for your party or event!

Melissa Etheridge may be available for your next special event!

Frequently Asked Questions About How To Hire MELISSA ETHERIDGE for a private party or special event.

Include information about your plans for your event and how taking steps to hire MELISSA ETHERIDGE (or someone similar) might be of special interest.

Official booking fees for MELISSA ETHERIDGE, or any other celebrity, are determined based on a number of factors and may change at anytime without prior notice.