How to Hire JILL SCOTT For Your Event!

Born in 1972 in North Philadelphia, Jill Scott grew up in the ghetto with her mom and grandmother. A deeply loved and gifted child, she learned to talk at only eight months and was reading by age four. Always the center of attention, her principal in elementary school described her as a little butterfly. 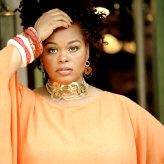 After running from Jill’s abusive stepfather, mother and child moved in with Jill’s grandmother, with whom she had a very close bond. After a rough but memorable childhood, Scott attended Temple University, studying secondary education. She was planning on becoming a high-school English teacher.

When she was placed at a school as a student-teacher, her fellow professors disapproved of her unique method of teaching the kids: she often incorporated singing and melody in order to help with memorization. Due to the negative comments, she was receiving, she quit.

Shortly thereafter, a friend helped her in joining a local theater troop. After some hard work, she earned a spot on the Canadian cast of Rent, began to do poetry readings and befriended some big names in the Philly artistic community, included DJ Jazzy Jeff. It was here that Scott’s musical career took off.

Hire Jill Scott for a memorable evening of entertainment!

Encouraged by Jazzy Jeff and Ahmir “Questlove” Thompson of the hip-hop group The Roots, Jill Scott wrote several songs in only three days during the summer of 1999. One of them, entitled “You Got Me,” was performed by Erykah Badu and The Roots, and won a Grammy for Best Rap Performance (Duo or Group).

A few months later, after Jeff burned 100 demo CDs and marketed the soul singer, Jill Scott signed with the new label Hidden Beach. During this whole process and since then, she collaborated with Will Smith and Common, and worked on soundtracks for “Down to Earth,” “Wild, Wild West” and “In Too Deep.”

Hire Jill Scott to entertain your friends and colleagues!

Amazingly, Jill Scott made 52 songs for her debut album and had a lot of trouble trimming it down. Finally, after much deliberation, “Who Is Jill Scott? Words & Sounds, Vol. I” was released in 2000. It featured music that was youthful enough for the younger generation and soulful enough for those above 40.

Accolades came pouring in for her unique contribution to hip-hop: “Who Is Jill Scott?” was certified platinum, and she received three Grammy nominations (including one for Best New Artist), three NAACP Image rewards and one Soul Train Award for Best Female R&B Album.

Her fame carried her on stage as she performed on VH1’s Divas Live with Aretha Franklin; speaking of Aretha, Jill Scott was the 2001 recipient of the Aretha Franklin Award as “Entertainer of the Year” at the Lady of Soul Awards.

Hire Jill Scott for your party or event!

Frequently Asked Questions About How To Hire JILL SCOTT for a private party or special event.

HOW TO BOOK JILL SCOTT?
(i.e., how to hire JILL SCOTT for an event)

Include information about your plans for your event and how taking steps to hire JILL SCOTT (or someone similar) might be of special interest.

Official booking fees for JILL SCOTT, or any other celebrity, are determined based on a number of factors and may change at anytime without prior notice.

IS JILL SCOTT AVAILABLE TO WORK MY EVENT?
(i.e., what is JILL SCOTT‘s availability?)