How To Book
GARY ALLAN
For Your Event!

Gary Allan may be available for your next special event!

How To Hire GARY ALLAN For A Private Party or Special Event!

“Just another hat act.” Those are words Gary Allan has heard whispered before.

Debuting when he did in 1996, at a time when Nashville was scratching a rash of suburban cowboy hat-wearing newcomers, it was perhaps an inevitable response. But he had the edge of experience.

Having honed an individual style on the honky-tonk circuit in his native California since age 12, Gary Allan is nothing if not resilient, and like the long line of honky-tonk icons whose music has inspired him – Lefty Frizzell, Merle Haggard, Johnny Horton, Waylon Jennings, George Jones, Willie Nelson, Buck Owens – he has learned that the best way to meet a challenge is head-on. With a smile.

“There were these guys at Buck’s place last night,” Allan says, the day after giving a by-invitation performance at a Bakersfield birthday celebration for Buck Owens. “I was signing their Gretsch guitars. They were way into punk, and they said, ‘Man, we thought you were just another hat act out of Nashville, and you rawk!’ When people see you’re real, they’re so impressed, and they so want something like that. I’ve had those guys at my shows since I was 15. Our shows are different that way – I don’t worry about politics too much. I go in and I have fun.” 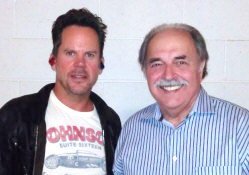 If Gary Allan sounds relaxed, he has earned the right. After playing countless smoky bars with his dad as a teen, he led his own band through the clubs and fairs of Southern California for several years before signing with Decca Records and releasing two albums that each generated Top 10 hits (single “It Would Be You” climbed to #5). His third album, “Smoke Rings In The Dark,” was by far his most honest and rewarding release to-date. The hard-working entertainer achieved that feat following the most tumultuous year the music industry’s seen in decades. When Decca closed in January of that year, corporate maneuvers could have relegated Allan to the “Whatever Happened To…?” column in tabloid rags. Instead, he was one of only four artists picked up by parent company MCA. His new deal afforded him the time and resources to create a more mature, career-defining record.

A great singer sounds like they’ve climbed inside the song and are living it as they sing. There’s no distance between their vocal and the song’s emotion. When Gary Allan sings, whether he’s parsing a lyric with humor or pain, he sounds like he’s down with the dust and sweat and compromise of everyday life – no high-glam stylings here.

Capturing that mix – the light and the dark, the laughter with the anger, the conservative and the unusual – goes to the heart of the, sometimes contradictory, cultural traditions that helped shape the divorced father of three. Gary Allan calls the region around Orange County, California, home – an area rich in country music history. It’s one of the few places in Southern California with working cattle ranches, where cowboys still rope and brand and go two-stepping at night.

“We get asked a lot at shows, ‘What’s a guy from California doin’ playin’ country music?'” Allan says. “There’s a lot happening on the West Coast. And it’s different than Nashville. I never heard the terms ‘radio-friendly’ or ‘commercial value’ until I got to Nashville. When we were writing songs in California, we wrote ’em for how we thought they would come off in a club — y’know, ‘How’s this gonna be to sing live to people?'”

A short drive west from those cowboy roundups are the beach communities where Gary Allan loves to surf – and where the punk and modern-rock scene still thrives. Interestingly, many of its pierced and tattooed denizens are also exuberant fans of country legends like Johnny Cash, Buck Owens and Hank Williams. Allan sees them at his own shows, and believes they respond to country music’s relevancy.

“It’s real life,” he says. “The great country songs, they’re powerful. I don’t care what kind of music you listen to, they have a lot of soul. That’s what a lot of country’s lacking today.”

Allan’s record deal was cinched by his extensive performance experience on the club circuit, where, like any stage-savvy veteran, he learned to listen to his audience and what makes them respond. For Gary Allan, it’s the live moments connecting him to an audience through song that still define country music.

Hire Gary Allan for your event!

Gary Allan may be available for your next special event!

Frequently Asked Questions About How To Hire GARY ALLAN for a private party or special event.

HOW TO BOOK GARY ALLAN?
(i.e., how to hire GARY ALLAN for an event)

Include information about your plans for your event and how taking steps to hire GARY ALLAN (or someone similar) might be of special interest.

Official booking fees for GARY ALLAN, or any other celebrity, are determined based on a number of factors and may change at anytime without prior notice.

IS GARY ALLAN AVAILABLE TO WORK MY EVENT?
(i.e., what is GARY ALLAN‘s availability?)