How to Hire FRED HAMMOND For Your Event!

Hire Fred Hammond:
GRAMMY AWARD winning Frederick William Hammond (born December 27, 1960) is an American gospel singer, bass guitar player, and record producer. He is regarded as one of the most popular figures in contemporary gospel music.

He is known for using a variety of different styles in his music such as R&B, hip-hop, and disco.

A Detroit-born producer and performer, Fred Hammond’s many musical experiences started when he was 12, singing in his church choir, with his mother the catalyst for his powerful faith. Later, he played bass for the Winans, then spent more than a decade as a vocalist with the popular urban group Commissioned. 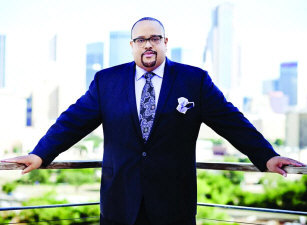 Hire Fred Hammond for your festival or concert plans!

He has since launched a successful solo career and produced projects for numerous urban and contemporary Christian acts. He is one of music’s elite, known for his soaring voice as well as his production and songwriting talents – and he has a shelf full of awards and nominations to prove it.

On his Benson album, “The Spirit of David,” Fred Hammond uses his strong, soulful voice, songwriting talent and love of the gospel the way he believes they were meant to be used. “Pastors and friends have told me I have a David anointing, from a psalmist standpoint,” says Fred. “David was a worshipper, and that’s what I try to be.”

“I’ve faced a lot of giants myself – I was fatherless, growing up in Detroit public schools – and God delivered me in so many different ways, just the way he delivered David.”

The project reunited Fred Hammond with Radical for Christ, the vocal ensemble he introduced with the 1995 album, “The Inner Court,” which he assembled in 1994.

“I had a rough year, leaving Commissioned and rebuilding. I’ve been doing this since I was 22, but I had to be a newcomer all over again. That can make you tired. I had to pray all the time, “Lord, don’t let this desensitize me. Rejuvenate me daily.” “‘Promise Keeper’ is a blessing song,” he continues. “God has never reneged on a promise to me. And ‘Blessings and Honor’ is special to me because of how it was created.”

Throughout his musical journey, Fred Hammond has asked God to guide his creativity and talent. He is certain that the work he is doing is exactly what he should be doing at this point, and that God has shaped his vision.

“I understand what it’s like to feel that God is not accessible,” he says. “When I was growing up in the church, I would look at the way the older people who had a relationship with God dressed and carried themselves. I thought to myself, ‘If that’s what it takes to be serious with God, then I’ll never get there.’ Instead, I want to be accessible – I want my music to show people that even though I may be at a different point in my relationship with Him than they are, they can still get there. I want to show that God continues to love me where I am, even when I make mistakes – and He will love them right where they are, too.”

Essence Magazine (2017 Collector’s Edition) names Fred Hammond in the esteemed list of the 50 Greatest Male Singers of All Time! Fred Hammond has been hailed as an Inspirational Music Icon whose music STILL reaches people from all walks of life.

Jamie Foxx performed Hammond’s signature anthem “No Weapon” during his acceptance speech at the NAACP Awards and elaborated during an interview (on Jimmy Kimmel Live) about how the song had such an incredible impact on Quentin Tarantino, Kerry Washington and the cast of the film, D’Jango, as they were shooting some of their most intense, heart-wrenching scenes.

Throughout his professional career, Fred Hammond has maintained a reputation for excellence and few gospel artists can boast of the consistency of sales, radio airplay and concert appearances that he has achieved over the course of his career independent of the cross-over boost.

As a solo artist, founder of the pioneering urban group, Commissioned, and his work with Radical for Christ combined, Fred Hammond has sold more than 8 million albums and these endeavors have made him a mainstay on Billboard’s Gospel Chart top 10. His previous release {Pages of Life} Chapters I & II exceeded Double Platinum status and held the #1 position on the Billboard Gospel Charts for more than 15 weeks.

His 2006 project entitled Free To Worship bombarded Billboard’s #1 position on the Gospel Charts and was hailed as one of the year’s best-selling gospel albums.

Fred Hammond continues to find touring success year after year and shows no signs of slowing down. An example is the highly successful, annual 50+ city FESTIVAL OF PRAISE TOUR, which he headlined along with Donnie McClurkin, Hezekiah Walker, Israel Houghton, and Kim Burrell.

In 1997, he shared the stage with Kirk Franklin & Yolanda Adams performing before more than 500,000 people on The Tour of Life, the most successful tour in gospel music history!

He also served as the Creative Director and was Featured Artist on Walt “Baby” Love’s Power 98, ALW’s The Living Proof and ALW’s The Shout 2000 Tours just to name a few.

Hire Fred Hammond for your party or event!

Fred Hammond may be available for your next special event!

Frequently Asked Questions About How To Hire FRED HAMMOND for a private party or special event.

Include information about your plans for your event and how taking steps to hire FRED HAMMOND (or someone similar) might be of special interest.

Official booking fees for FRED HAMMOND, or any other celebrity, are determined based on a number of factors and may change at anytime without prior notice.