How to Hire BOB CARLISLE For Your Event!

Bob Carlisle performed with several bands, most notably Allies and Billy Thermal, before launching a solo career, where he received a Grammy Award and four Dove Awards.

He writes:
I was born in Los Angeles, California, in 1956 to wonderful parents, Donald and Charlotte Carlisle. I grew up in Santa Ana, California. At the age of seven I began taking private guitar lessons after my father had bought me a Montgomery Wards guitar on my seventh birthday. I was not only taught to read and write music as well as play the guitar, but eventually studied orchestration and arranging.

As a young man, the soul bug bit me. I fell head over heels in love with the likes of Otis Redding, Wilson Pickett, James Brown, Tower of Power, Sly and the Family Stone, etc. While a piece of my heart will always be there, I truly appreciate anything that’s done authentically and with passion.

I was introduced to Christian music in the early 70’s during the time of the “Jesus Movement” in southern California. That wonderful move of God’s hand was also the birth of what we now know as “Contemporary Christian Music.” 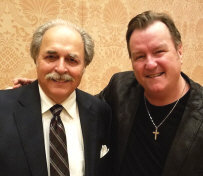 At the age of sixteen, I joined with Erick Nelson to form the band, Good News. I later joined the group, Psalm 150 where I met, for the first time, the girl who would eventually be my wife. After the recording of their second album, the majority of the members of Psalm 150 went on to tour with Andrae Crouch as his band. At the same time, I ventured out as a session singer and musical “gun for hire.”

I began doing more and more recording session work as a singer, in Los Angeles. Through this session work I was fortunate to have a relationship with songwriters, Tom Kelly and Billy Steinberg who wrote the songs “True Colors,” “Like a Virgin,” etc., performed by various artists throughout the 80’s. It was during this time that I really gained an education regarding the art of producing.

I had been playing at a place called Rosie’s in L.A., when one night, in the middle of a show, I just had to leave the stage. My spirit had boiled to the point that I just couldn’t do it anymore. Sure, I was making a living and doing my best with what I knew how to do – to provide for my family – but in my heart, I had relegated position of the God of my passion to that of a spectator.

In the alley behind Rosie’s, I cried out, “God, I don’t care where You lead me, just get me out of here. I will wash cars with joy for You, if you say so. I will do anything just to know that I am once again putting one foot in front of the other in Your precious will again.”

Within a week of that event, my dear friend and then member of the band, Sweet Comfort Band, Randy Thomas and songwriter, Sam Scott came to my home to tell me they were starting a band. They had come to ask if I would consider being a part of it as lead singer. The band was later named Allies and, by the Grace of God, we were immediately signed to Light Records before we had even finished our demo…truly a miracle.

Allies was very much a spiritual halfway house for me. We were a rag-tag group of guys who banded together to make powerful music that gave Glory to God. I will be forever grateful for the experience.

I vividly remember a concert venue in Southern California in which the audience was absolutely packed to the rafters. It was going to be a great concert. As we were backstage we could hear the audience chanting the band’s name in anticipation of what was to come. Allies, at the time was implementing the whole military paraphernalia thing.

We would even stop by army surplus stores all over the country to pick up stuff for the stage…outfits, camouflage netting, etc. We even transported our CDs and cassettes in ammo boxes. That night, I was wearing camo fatigues, combat boots and a red gun belt.

In the midst of one our hottest songs, and as the crowd was in a frenzy, for some reason I took it upon myself to do a Prince – or the artist formerly known as Prince – move. I jumped up, leapt down, and…split my pants. I mean SPLIT AS FAR AS THE NORTH IS FROM THE SOUTH!! Our drummer Jimmy was hysterical because he had a view that nobody else had.

Mid-song I had to sidestep off-stage where there was a man who said, “I’m about your size; I can help you!” He came back with a pair of purple maxi-bell bottomed corduroy Levi’s that were about four inches too short. I went back on-stage looking like a time-warped Captain Kirk on steroids and finished the concert. I still hear about it to this day. “I was there” is the most common phrase I hear. “Man, I was there. Remember the pants? I was there.”

The band was touring mainly east of the Rocky Mountains and yet we were originating out of Southern California, so it made sense to eventually relocate to Nashville. At about the same time, the song “Why’d You Come In Here Lookin’ Like That” had been picked up by Dolly Parton and went to the number 1 position on the Billboard country charts. This really helped to encourage me as a songwriter in Nashville.

Allies ran its course in 1992. There was no rift in the band, we just felt that it was time to put it to bed. Record sales weren’t what they once were, and it was just time.

My first solo project was “Bob Carlisle” in 1993 followed by “The Hope of a Man” in ’94 – both on the Sparrow label. Upon completion of these two albums, I decided to sign with Diadem music.

“Butterfly Kisses (Shades of Grace)” was my first release through Diadem. In case you didn’t know already, a butterfly kiss happens when the delicate lashes of your baby’s eyes sweep across your cheek.

The song “Butterfly Kisses” was written for my daughter Brooke. I was struck late one night with the reality that my baby girl had grown up and that she would be leaving my home soon. The joy of happy memories and the burden of missed opportunities collided in my heart and the song just poured out.

When I wrote it, I never expected it to be recorded. I was content for it to be my private love letter to Brooke. I am thrilled at its success, but it is strange to hear a song written for your daughter being played on the radio. It is even stranger to hear the song covered by another artist.

To know me is to understand that I am a man captured by the Grace of God. My father modeled his faith to me in practical terms: doing the Word without boasting it. He was an incredible man, and although he passed away a several years ago, he was the greatest spiritual influence I’ve ever known.

My first calling from God is not to be a singer, but rather to be Jacque’s husband and a faithful father to Brooke and Evan. To go out and travel around the world and sing for people is a wonderful blessing. I’m humbled to be able to do it, but it’s a perk. If I’m not taking care of business here at home, then I have no business touring and singing.

Hire Bob Carlise:
From hugs to butterfly kisses … pony rides to wedding days, Bob Carlisle has touched the hearts of America with his song, “Butterfly Kisses.” Through television, radio and concerts, this powerful, number one song has quickly climbed the charts and exploded into people’s daily lives.

Hire Bob Carlisle for your party or event!

Bob Carlisle may be available for your next special event!

Frequently Asked Questions About How To Hire BOB CARLISLE for a private party or special event.

Include information about your plans for your event and how taking steps to hire BOB CARLISLE (or someone similar) might be of special interest.

Official booking fees for BOB CARLISLE, or any other celebrity, are determined based on a number of factors and may change at anytime without prior notice.